From visual arts, to theatre, to the art of ngatu tā‘uli (blackened tapa cloth) - eight Pasifika artists are being recognised for their contribution to Pacific arts through our Arts Pasifika Awards.

Caren Rangi, Chair of the Arts Council, says the awards play an important part in the celebration of Pacific artistic excellence in New Zealand.

“It's difficult to measure the significant, intangible impact that the work of our Pacific creatives has on the cultural tapestry in Aotearoa. So every year it is a joy and an honour to acknowledge the work of the winners of these awards, whose talents have contributed enormously to our creative eco-system over the past 12 months.”

“The Arts Pasifika Awards also represent the diversity of talent and experience across our Pacific creative community”, says Caren.

The Pacific Toa Award, which recognises the contribution of a Pasifika artist with the lived experience of disability, is now in its fourth year, and is one of the many significant opportunities and initiatives developed under the Pacific Arts Strategy 2018-2023.

While there are usually seven award winners, this year there are eight – two winners in the ‘Special Recognition Award’ category, which acknowledges a notable contribution to Pacific arts, nationally or internationally.

Due to the COVID-19 pandemic, there hasn’t been an in-person awards ceremony since 2019. Caren says the Arts Council are thrilled to once again host an in-person event this year.

“It means a lot to our community to be together physically, so we’re very excited to bring together our winners and their families again in 2022.”

The selection process for these awards begins with public nominations, followed by robust assessment including external Pacific arts experts and a panel which makes recommendations to the Chief Executive of Creative New Zealand. The Arts Council of New Zealand Toi Aotearoa reviewed the selection recommendations and made the final decisions. 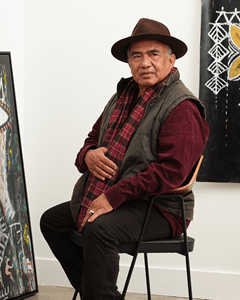 Feu’u is an internationally renowned artist – acknowledged as both a leader and mentor within the Pasifika arts community. He has been pivotal in shaping the interest in contemporary Pacific art globally and nurturing a generation of Pacific artists locally.

Feu’u grew up in the village of Poutasi, in Western Samoa, immigrating to New Zealand in 1966. Since becoming a full-time artist in 1988, his paintings, woodcut prints, bronze and wooden sculptures are now held in public and private collections around the world.  He was the first artist of Pacific heritage awarded the James Wallace Art Award (1995) and the New Zealand Order of Merit for his “Achievements in Art” (2001).

This year Feu’u has once again joined forces with the international company, Specsavers, as Patron for the Fred Hollows Foundation New Zealand.  Limited edition frames (which have imagery from a painting included in his new series, Protection of the Pacific Ocean) will be available in Specsavers’ stores nationwide from November 2022.  A donation from each frame that is sold, will enable someone blinded by cataracts to have sight.

Fa’asamoa is the unifying element of Feu’u’s work. The term fa’asamoa is generally defined as “the Samoan way”. The social structure of Samoan society is held together (and actively maintained) by an adherence to unwritten but understood cultural conventions. 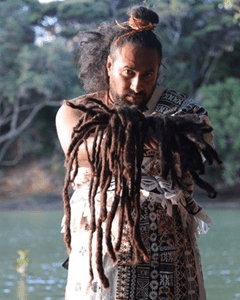 He is a poet and multi-disciplinary artist whose works are inspired by his upbringing in Fiji and Aotearoa, incorporating poetry, visual arts, performance arts, and sound/musicality with a Pan Pacific approach.

His creations draw from people and places, particularly cities, islands, and the ocean; a combination of the old and the fresh, Pacific heritage/tradition has heavily influenced his contemporary narrative connecting the past to the present to space, time and people.

Daren completed a Bachelor of Creative Arts at Manukau Institute of Technology in 2013 and a master’s degree in creative writing – First Class Honours from University of Auckland in 2016. He also co-founded the South Auckland Poets Collective in 2008; and founded the Street Poets & Artists Collective Enterprise (SPACE) in 2021 – working with former Rough Sleepers at Auckland City Mission and Auckland Council to publish a poetry anthology book titled, Rough Lives Speak in August 2022. 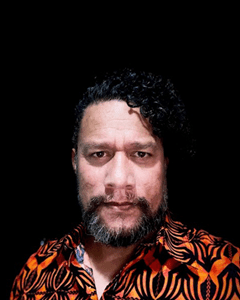 Stone is an interdisciplinary artist who was born in Tonga, in the village of Pātangata and is the second youngest of 12 children. His father was a carpenter, and his mother was a fisher, weaver and Tapa maker. Stone's father nourished and encouraged his creativity from a young age, and later Stone was inspired to become a professional artist by his teacher Professor Viliami Toluta’u.

Stone’s art practice is heavily influenced by his Tongan heritage, and his work is inspired by the sacred art of ngatu tā‘uli, blackened tapa cloth. His work often combines traditional methods with contemporary and experimental techniques. His current media is smoke and real spider webs. Believing abstract art in the Pacific (especially Tonga's heliaki - metaphor) to be one of the most expressive and pure forms of art making, it has therefore become Stone’s preferred style. 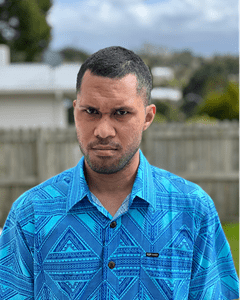 Ululau was born in 1994 at Moto’otua Hospital in Apia, Sāmoa. He had meningitis at 3 months old and was later diagnosed with epilepsy. Ululau has attended Art Therapy classes and is currently an artist at Māpura Arts Studios in Auckland, Aotearoa. Ululau’s work includes drawing, printmaking, poetry, music, painting and sculpture.

He is a visual storyteller, with his Pacific identity weaving through all his art, and many of his works are based on Samoan mythology. He tells stories of Sāmoa through his work.

At Māpura Arts Studio, while doing printmaking, Ululau and his mother would play a game to see who could create the most beautiful prints, with no mistakes. These games built the foundation of Ululau’s artistic confidence, and through his tutors he has learned to create with focus, technique, and pride. 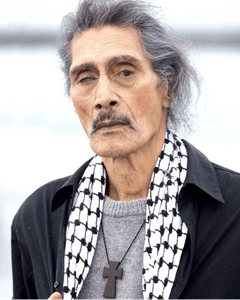 From his groundbreaking novella, A Boy Called Broke - written while an inmate in Rolleston Prison - to participating in the formation of Pacific Underground with his sister Losa Tamati, to acting alongside Scarlett Johanssen in the blockbuster film Ghost in the Shell, to his legendary musicianship - Fa’amoana’s journey of creative work has had a significant impact on Pacific storytelling in Aotearoa.

He was also a core writing consultant on Netflix series The Panthers, where the character Fuff was based on his lived experience.

Fa’amoana’s contribution to the Royal Commission Pacific hearing crossed the boundaries of art and social justice, where eight years of the careful articulation of his story through performance became his testimony, and a 20-minute version of award-winning documentary A Boy called Piano, directed by Nina Nawalowalo, was shown to support his words.

A Boy Called Piano tells the remarkable story of Fa’amoana’s time as a state ward in Aotearoa in the 1960s and the intergenerational impacts of these experiences. The film recently won ‘Best Feature Documentary’ at The Montreal Independent Film Festival, and has been selected for the 2022 New Zealand International Film Festival. 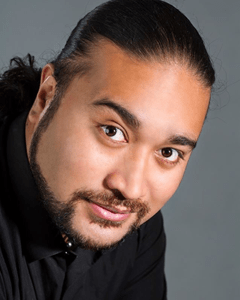 Troy Tu’ua, hailing from the beautiful villages of Magiagi, Mulifanua and Afega, in Sāmoa, is a multi-disciplinary artist and one of the first-ever graduates of the Pacific Institute of Performing Arts (2009). After graduating, Troy made his professional theatre debut in New Zealand Opera’s La Bohème and starred in Auckland Theatre Company’s Pollyhood in Mumuland in 2011, A Frigate Bird Sings in 2012, Badjelly the Witch tour in 2013 and Sons in 2014.

In 2014, Troy was part of the cast of New Zealand’s first ever Pasifika musical, The Factory Musical for Kila Kokonut Krew, which toured Australia and Scotland for the Edinburgh Fringe festival. Most recently, Troy directed Lalelei, Mirror Mirror and Wizard of Ōtāhuhu, which won the prestigious Auckland Theatre Awards in 2017 - 2018 and also directed the hit theatre show Dawn Raids by Oscar Kightley produced by Pacific Underground and Auckland Theatre Company. 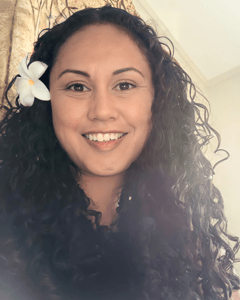 Dahlia Malaeulu is a Samoan New Zealander with connections to the villages of Sinamoga and Vaivase tai in Sāmoa. She is an award-winning author, publisher and creator of Mila’s Books – Pasifika children’s books that help tamaiti to be seen, heard and valued as Pasifika.

A passionate educator at heart, Dahlia is driven by enabling tamaiti to confidently succeed as themselves while sharing the power of our stories as Pasifika. She is the first Pasifika author to have stories published across all schooling levels and travels around Aotearoa in a variety of reading advocacy roles. At Mila's Books Dahlia proudly leads the only all-Pasifika children’s publishing team in the world while continually proving what is possible for Pasifika creatives, communities and our stories. 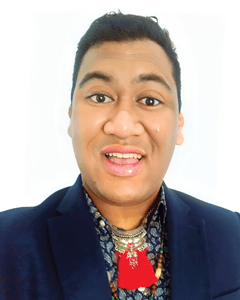 Joshua Pearson is an Aotearoa-born Samoan sonic artist, composer, and creative technologist. His villages are from Salelavalu, Sapapali'i, Safotulafai and Fusi on the island of Savaii, Sāmoa.

Joshua is a music composition graduate at the University of Auckland, specialising in vocal and instrumental music and sonic arts/electroacoustic music under renowned composers Eve de Castro-Robinson, Leonie Holmes and sonic artist John Coulter. Joshua is currently completing his master's degree in creative technologies at AUT (Auckland University of Technology) this year.

Joshua’s biggest highlight as a composer and sonic artist was being selected as the composer-in-residence for the National Youth Symphony Orchestra in 2020 – he was the first Pasifika person to gain this position. The NYO performed the world premiere of his orchestral piece, 'When a pale blue dot breathes, a crowd of cacophony begins', in December 2020 at the Michael Fowler Centre. Another highlight came recently in August of 2022, when the Auckland Chamber Choir played his protest piece, 'No ro hunu ake' (Sprung from the Earth), at the ISCM World New Music Days Festival in Tamaki Makaurau. This piece was about action against climate change in the Pacific Islands.