Correction/clarification (July 2020): Garry Nash was funded through the 2013 Craft/Object Fellowship to research and document the process of creating coloured glass from scratch. The Craft/Object Fellowship provides established and senior New Zealand practitioners, curators and writers the opportunity to commit to a period of investigation, experimentation or research in their practice. We can confirm that Garry Nash’s project was acquitted by Creative New Zealand in 2014, as he met the requirements of the grant by providing a report evidencing the research and experimentation that we’d offered funding towards. Our media release below suggests a book would be produced, which we understand was Garry’s intention, but this was not an actual requirement of the funding under this fellowship. We apologise for any confusion the contents of this media release may have caused. We have kept its original wording for transparency. Ngā mihi.

Creative New Zealand is pleased to announce veteran glass artist, Garry Nash, as the recipient of the 2013 Craft/Object Fellowship.

The Fellowship provides established and senior New Zealand practitioners, curators and writers the opportunity to commit to a period of investigation, experimentation or research in their practice.

Garry, who is the first glass artist to receive the $65,000 Craft/Object Fellowship, will use the grant to produce a ground-breaking book on creating coloured glasses.

The Glass Makers Palette (working title) will detail how a palette of compatible coloured glasses can be created within a studio situation, and will be the first of its kind in the world. The technical manual will consolidate three decades of Garry’s work and hundreds of experiments with different glasses and chemicals.

The decision to support Garry’s proposal was an easy one for the Arts Board, following a unanimous recommendation from the assessment panel.

“This Fellowship will allow Garry to complete a project that will cement his place in the canon of studio glass – a position that the Arts Board felt he well deserves,” says Creative New Zealand Chief Executive Stephen Wainwright.

For Auckland-based Garry, who has been recognised both nationally and overseas for his work, the key motivator behind the book is sharing knowledge.

“I have always wanted to write this book to help address such issues. I’m excited at this opportunity to share my lifetime of study and help ensure coloured glass art continues to move forward long after I’m gone.”

Creative New Zealand can also see the potential of Garry’s book to open up new avenues of investigation at studio and tertiary education level.

“The results of producing such a book could have a long-term impact on the glass movement in New Zealand, and also has the potential to bring significant international recognition,” says Stephen.

Garry began working with glass in 1978, and his work is sought by collectors worldwide. He currently operates Garry Nash Studio. He is an honorary life member and past President of the New Zealand Society of Artists in Glass. In 2001 Garry was made an Officer of The New Zealand Order of Merit for services to Glass Art. His work is held in countless collections. 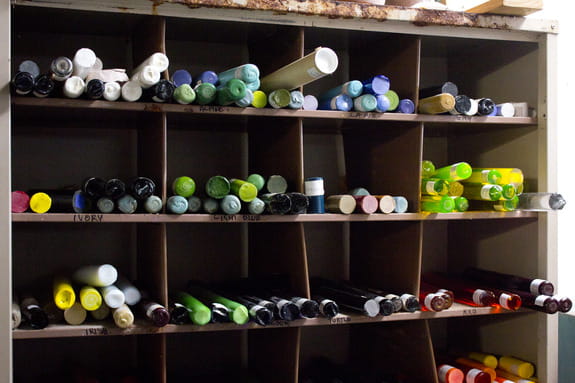 Experimental coloured glass rods made by Garry over many years.