The Creative New Zealand Arts Pasifika Awards 2020 recognise innovation and excellence in Pacific Arts and their contribution to the rich diversity of Aotearoa as a multi-cultural Pacific nation.

Eight Pasifika artists have been acknowledged today across seven categories with an online video announcement, as well as an intimate celebration with the Arts Council of New Zealand.

"It's a great honour for us to celebrate and recognise the amazing work our Pasifika artists continue to achieve in our communities, in Aotearoa and globally," says Arts Council of New Zealand Deputy Chair Caren Rangi.

"The eight award recipients this year are artistic and cultural experts in their fields, and the high calibre of applicants demonstrates the diversity of Pasifika talent here in our country and their valuable contribution to our national identity."

This year’s recipients range from award winning interdisciplinary artists who challenge and innovate, an internationally acclaimed visual artist, to an artist reviving the traditional art of Niuean hiapo.

This year there are two recipients of the Pacific Toa Artist Award, Pelenakeke Brown and Lusi Faiva. The award is in its second year and recognises the outstanding contribution of a Pasifika artist with the lived experience of disability. Pelenakeke is currently the interim Artistic Director of Touch Compass, a performance company that works with disabled and non-disabled creatives and is the first disabled artist to lead the company. Lusi is a founding member of Touch Compass, who has performed with the company for the last 24 years.

"This year has proven that our artists are adaptable and innovative, and through our Pacific Arts Strategy we've been able to shift our focus into the online space and continue to engage with our communities to ensure that Pacific Arts continue to be supported for future success," she says.

The 2020 Arts Pasifika Award recipients are as follows. 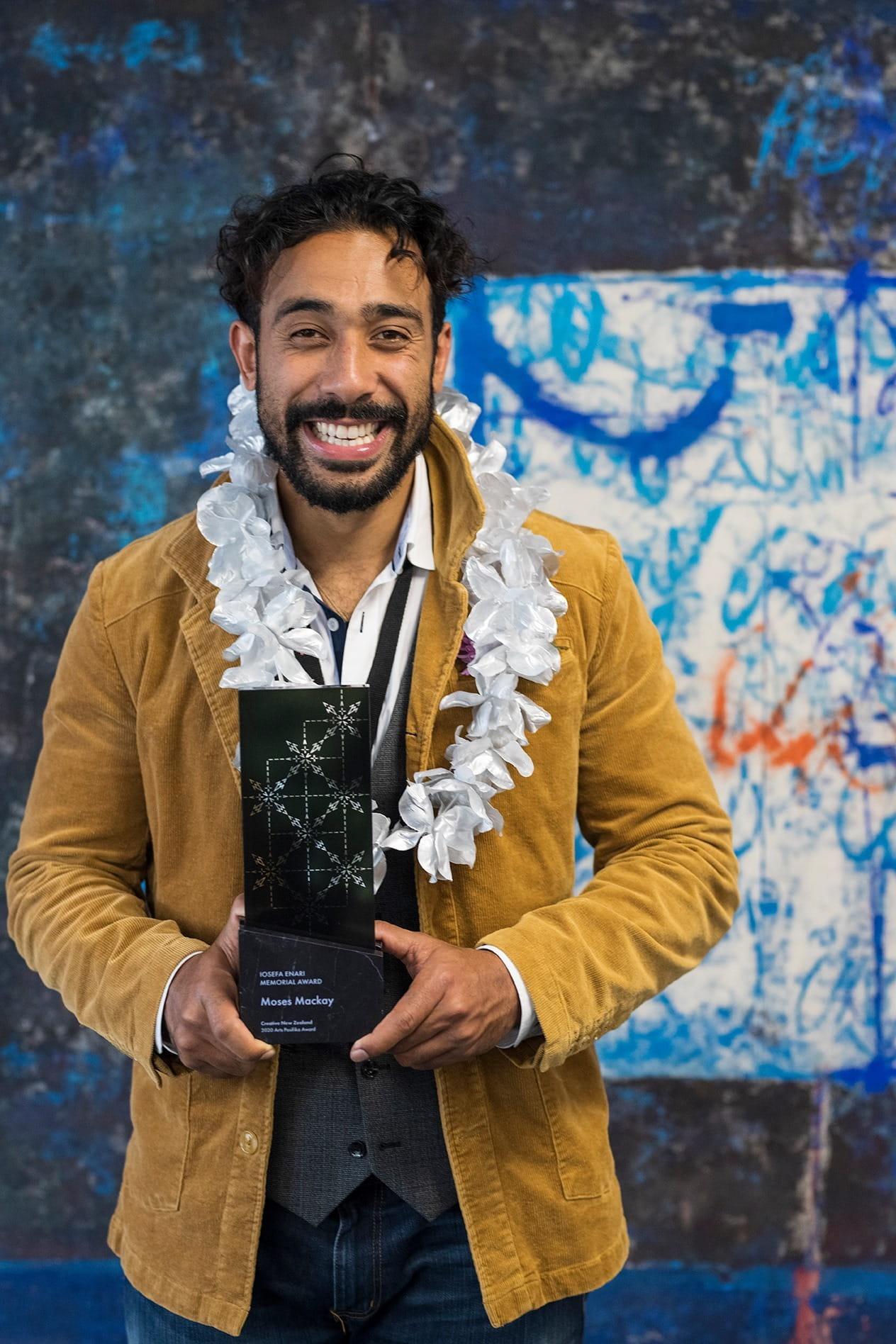 MOSES MACKAY (Based in Auckland)

Moses is a songwriter, musician, opera and theatre artist, and a one of the founding members of opera trio SOL3 MIO. Recent projects include Alofagia: Le Opera and the immersive musical Pleasuredome, directed by Michael Hurst and produced by Rob Tapert. In 2019 he was approached to be a contestant on the television show Celebrity Treasure Island, where he raised $22,500 for his chosen charity the Dream Chaser Foundation. Following this he was invited by the New Zealand Embassy and the New Zealand Olympic committee to perform in Tokyo, Japan in conjunction with the Rugby World Cup. This year saw the rescheduling of SOL3 MIO Live concert at the Spark Arena due to the COVID-19 pandemic. However, SOL3 MIO were approached by FLAVA Radio to host their Breakfast Show. Albeit a different stage, this was a proved a great opportunity for SOL3 MIO to connect with listeners both nationally and internationally, especially the youth. In the few weeks they’ve been at the helm, they have managed to double their listener numbers – and the numbers keep growing. Moses is currently working on some exciting projects, soon to be released. PATI SOLOMONA TYRELL (Based in Auckland)

Pati Tyrell is a Samoan interdisciplinary artist with a strong focus on performance. Utilizing lens-based media he creates visual outcomes that are cantered around urban Pacific queer identity. He has shown work at Museum of Contemporary Arts Australia, Pingyao International Photography Festival, Centre Pompidou Paris and was a 2018 Walters Prize nominee. Tyrell is a co-founder of the queer Pasifika arts collective FAFSWAG, who in 2020 received an Arts Foundation Laureate. Pati is a pioneering member of the New Zealand ballroom scene, father to the House of Aitu where he continues to build and mobilize his community. He is a graduate of the Bachelor of Creative Arts programme at the Manukau Institute of Technology, Otara. Pati is originally from Kirikiriroa, Waikato but is now based in Maungarei, Tāmaki Makaurau. 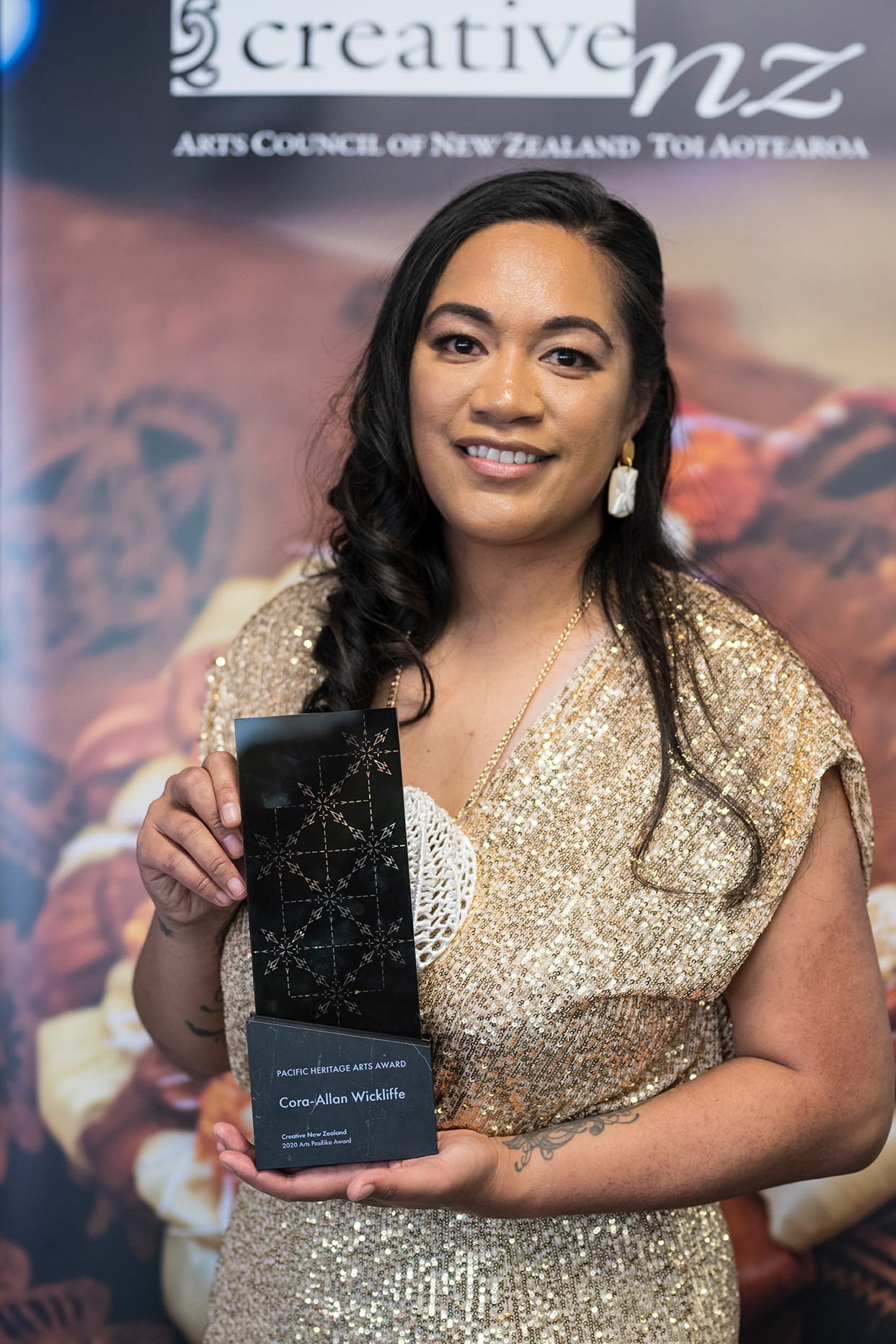 CORA-ALLAN WICKLIFFE (Based in the Auckland)

Cora-Allan is of Niuean and Māori descent, her grandparents Vakaafi Lafaiki and Fotia Lafaiki grew up in the villages of Liku and Alofi, migrating to Auckland in the 1960’s. As a contemporary hiapo practitioner she produces traditional pieces alongside her simplified modern hiapo works. In 2013 she completed her Master's in Visual Art and Design from AUT, also receiving an AUT Postgraduate Deans award for her research and excellence and was recently named as one of the McCahon house residents for 2021. She is the Curator and Exhibitions Manager at the Corban Estate Arts Centre, is a founding member of BC COLLECTIVE and resides in Waitakere with her fiancé Daniel Twiss and sons Chaske-Waste and Wakiya Wacipi. PELENAKEKE BROWN (Based in Auckland)

Pelenakeke is an interdisciplinary, Samoan/Pakeha disabled, immigrant artist from Aotearoa. Her work explores the intersections of disability concepts and Samoan ways of framing the world. Currently she is the interim Artistic Director of Touch Compass, a performance company that works with disabled and non-disabled creatives. She is a founding member of the company and the first disabled artist to lead the company in its 24-year history. Previous to this role she was based in Lenapehoking, Mannahatta (NYC). She has exhibited, performed and published work in the US, UK, Germany and Aotearoa. She has created projects with Movement Research, the New York Public Library for the Performing Arts Lincoln Center, The Metropolitan Museum of Art, The Goethe Institute and many other arts organisations and institutions. Pelenakeke is a 2020 Artist-in-Residence at Eyebeam (NYC). LUSI FAIVA (Based in Auckland)

Lusi is a dancer, performer and founding member of Touch Compass ever since she auditioned in their first audition workshop back in 1996. She has performed and toured across New Zealand and Australia in all of their major shows including the acclaimed performance Lusi’s Eden (based on her personal life story) directed by Christian Penny and choreographed by Catherine Chappell. She also attended the DanceAbility teacher’s training workshop in Europe in 2003 and the contact improvisation workshop with Andrew Morris in Australia in 2009. In 2014, she was featured in the dance box Mr and Mrs Jones, a short film, directed by Alyx Duncan. She has collaborated with Wellington-based performance company Everybody Cool Lives Here since 2018 and worked with the UK multi-sensory theatre group Frozen Light in 2019 on Mesina Returning Home, the first multi-sensory theatre show of its kind in Aotearoa for audiences with profound and multiple Learning Disabilities. In 2019 she also received a High Commendation award for Artistic Achievement at the Arts Access Aotearoa Awards for her long-established career and contribution to dance. Lusi's latest projects include The Political Dreaming, a development project with choreographer Alexa Wilson, as well as For Your Eyes Only, a digital virtual reality of creativity writings with Rowan Pierce and Everybody Cool Lives Here. TANYA MUAGUTUTI’A (Based in the Auckland)

Tanya has been an integral part of the award-winning arts company Pacific Underground since 1992.  Pacific Underground became a vehicle for ground-breaking Pacific theatre, music concerts, an album and theatre tours both national and international. From 2000 to 2010, along with husband and Music Director Pos Mavaega, the company presented the Christchurch Pacific Arts Festival developing multiple platforms for and by Pacific artists and crossing over their collective theatre skills to event management. Tanya continued to support community events such as Aranui’s AFFIRM and also started co-producing shows for the Christchurch Arts Festival, such as Igelese Ete’s Ifoga and Michel Tuffery’s First Contact. When the family relocated to Auckland due to the earthquakes, Tanya worked on major events Pasifika, Diwali, Lantern and Auckland Arts and Christchurch Arts Festivals. She has also worked in theatre with Auckland Theatre Company, Mangere Arts Centre, continuing today with the Court Theatre, Okāreka Dance Company and No.3 Roskill Theatre. She was the recipient of an Adam NZ Playmarket Award, is a freelance Producer, still creating with the Pacific Underground family to nurture the next generation of emerging artists. 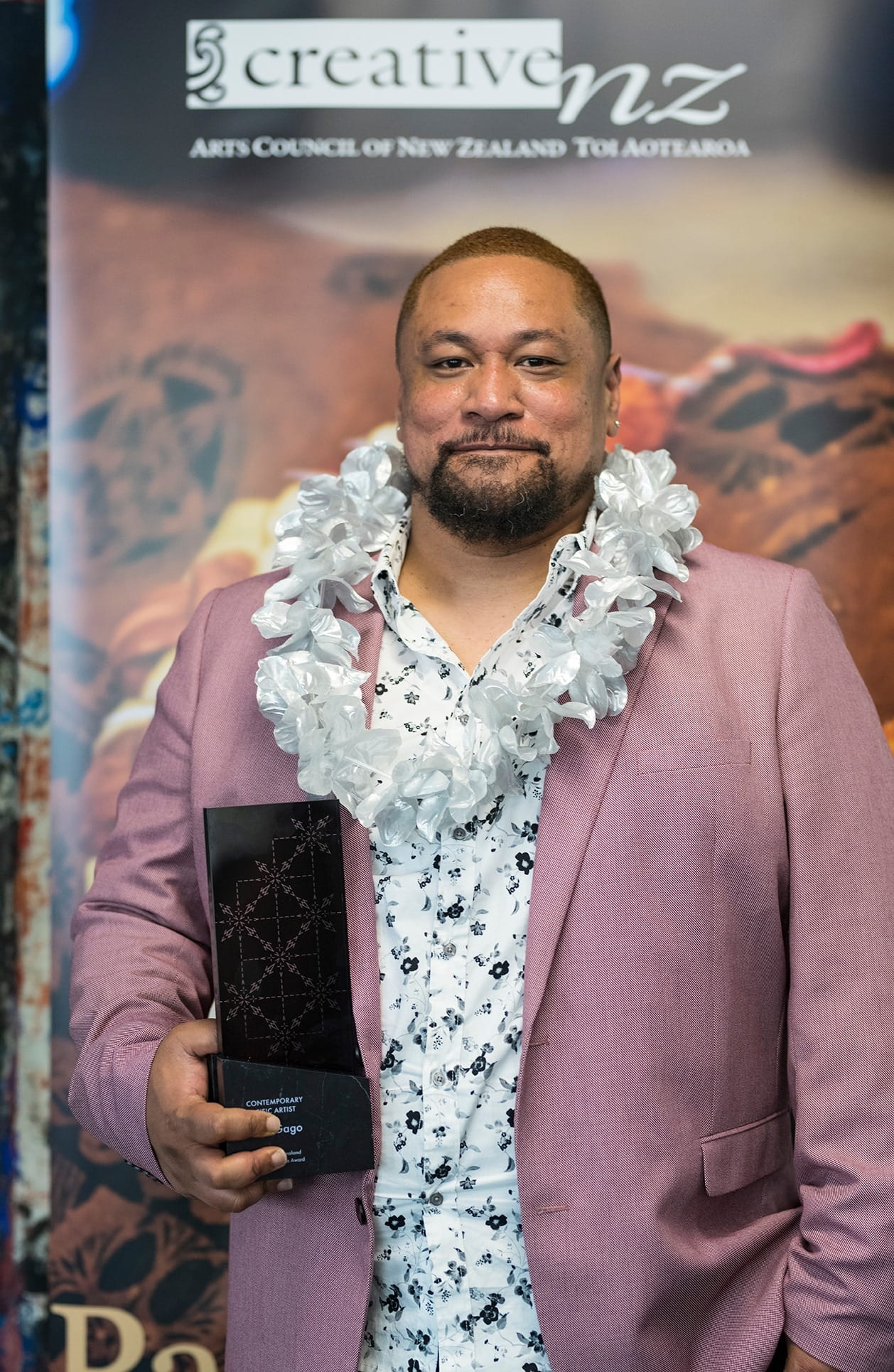 TANU GAGO MNZM (Based in Auckland)

Tanu is an award-winning photographer, interdisciplinary artist, and filmmaker. He is a 2020 Arts Foundation Arts Laureate, the 2014 Auckland Festival of Photography Annual Commission recipient, the 2018 Macmillan Brown artist in residence, and in 2019 was inducted into the Order of Merit, with Queen's honours for services to Pacific arts and the LGBTQIA+ community. Gago sits on a number of arts boards and advisory groups and is also a founding member of the LGBTQIA+ Pasifika Trust - The Love Life Fono Charitable Trust. He is a founding member of the Auckland vogue scene, as well as the co-founder and creative director of award-winning Queer Indigenous Arts Collective FAFSWAG. Over the past seven years FAFSWAG have exhibited and performed around the world, including Paris, London, Switzerland and Toronto. They’ve also had the pleasure of collaborating with some of Aotearoa’s innovators and creative misfits, including VICE, Neil and Liam Finn, COCOSOLID and Taika Waititi and Carthew Neil’s production company PIKI Films. Gago has spent the past ten years invested in cultivating the unique and important voices of artists and activists within the queer Indigenous space and remains committed to supporting and preserving pathways for future generations. 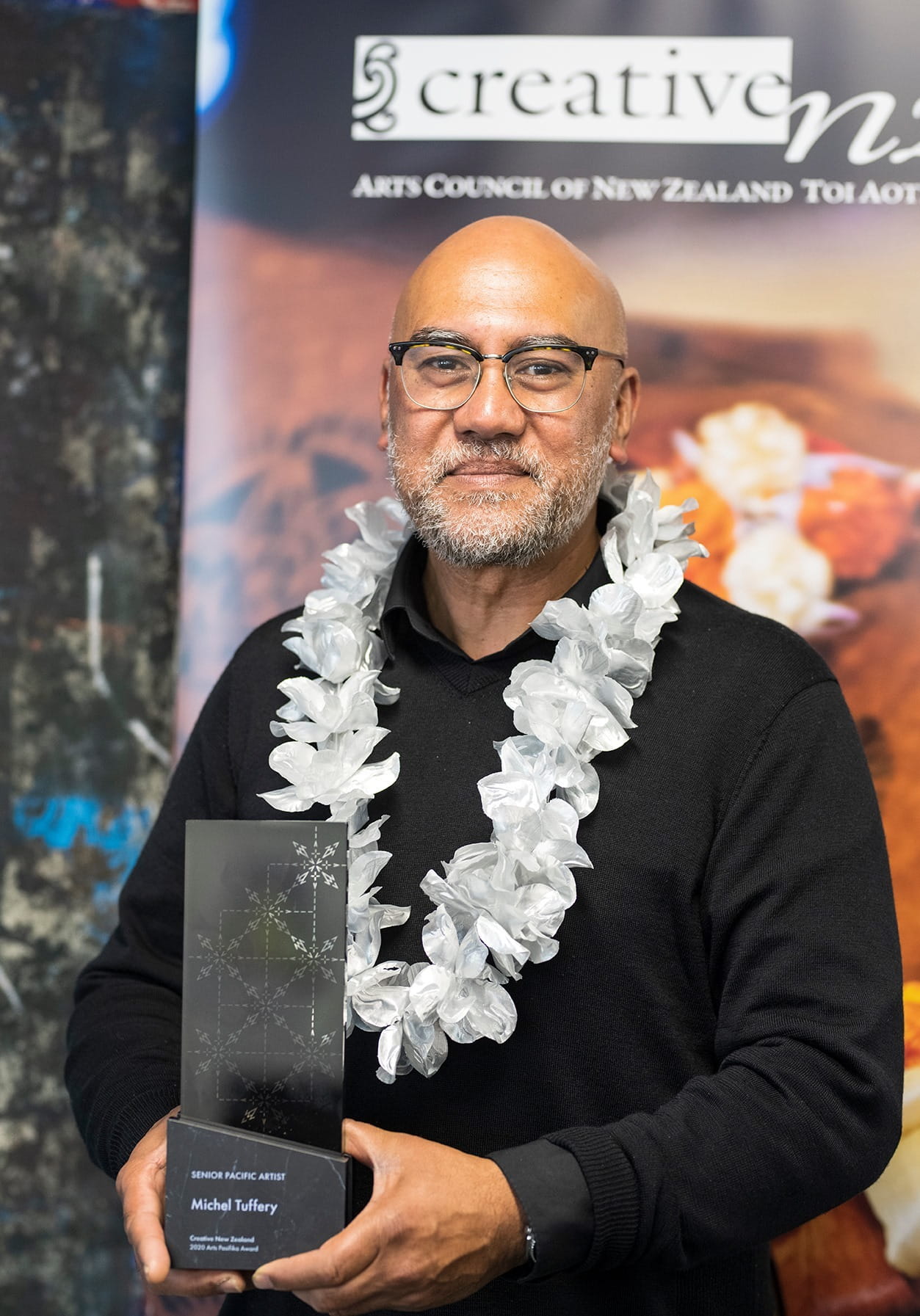 MICHEL TUFFERY MNZM (Based in Wellington)

Michel is a New Zealand-based artist of Samoan, Rarotongan and Ma‘ohi Tahitian heritage. In his art practice he plays the role of connector, working "in between" people and places and focusing a fresh lens on environmental, community, cultural and art historical divides. He exhibits worldwide and has undertaken research and community residencies throughout the USA, Germany, France, United Kingdom, Asia, India, Australia, as well as Aotearoa and the Pacific. In 2008 Michel was appointed as a Member of the New Zealand Order of Merit for services to art, but his real reward comes from enriching communities through his art.