A Suffrage 125 celebration with a difference is currently happening at the Old Government Buildings in Wellington.

A display of 30 original hand-stitched banners, made by artists, craftspeople, children and other interested participants in a series of workshops held in historic places around the country, is taking pride of place in a building that was the centre of Government at the time when the women’s suffrage bill was passed in 1893.

The individual artworks have been amalgamated into seven large banners marking the 125th anniversary of women’s suffrage in New Zealand. The banners were officially launched by the Associate Minister for Arts, Culture and Heritage, Hon Grant Robertson, over the weekend.

“The banners are a reference to the three Parliamentary petitions that were circulated around the country and which ultimately resulted in women finally being granted the right to vote,” says Heritage New Zealand Pouhere Taonga Director Regional Services, Pam Bain.

“The third petition was described by suffragist Kate Sheppard as a 'monster petition' made up of petition sheets circulated throughout New Zealand, and returned to Christchurch where Sheppard pasted each sheet end on end and rolled it around a section of a broom handle.”

The ‘Monster Petition’ survives, and contains 25,519 signatures – including some men. The roll was presented to Parliament with great drama. Sir John Hall, Member of Parliament and suffrage supporter, brought it into the House and unrolled it down the central aisle of the debating chamber until it hit the end wall with a thud.

Led by Dunedin artist Janet de Wagt and Heritage New Zealand, and funded by a Creative New Zealand grant, the series of workshops drew interest from people of all ages keen to be part of history. All participants at the workshops signed their names, referencing the suffrage petitions.

The individual components of the Suffrage banners incorporate embroidery, weaving, spinning and even elements like camellias made from harakeke (flax). Camellias were the symbol of women’s suffrage in New Zealand. The banners also include some family heirlooms like lace work and other taonga donated by participants, linking them to women of past generations.

Imagery like tram lines representing greater mobility for women – and consequently freedom – also feature in the banners, touching on some of the wider social change that was taking place at the time.

“The banners are an artistic representation of the extraordinary social movement that ultimately saw New Zealand becoming the first country in the world to grant women the right to vote,” says Pam.

“They are also a piece of living social history and a very fitting conclusion to New Zealand’s Suffrage 125 celebrations.”

The public can view the banners from the ground and first floors in the grand northern stairwell at Old Government Buildings (open 9am – 5pm weekdays). Admission is free but donations welcome. The banners will be on display until Friday May 31.

(Note that there is no public access on the second or third floors.) 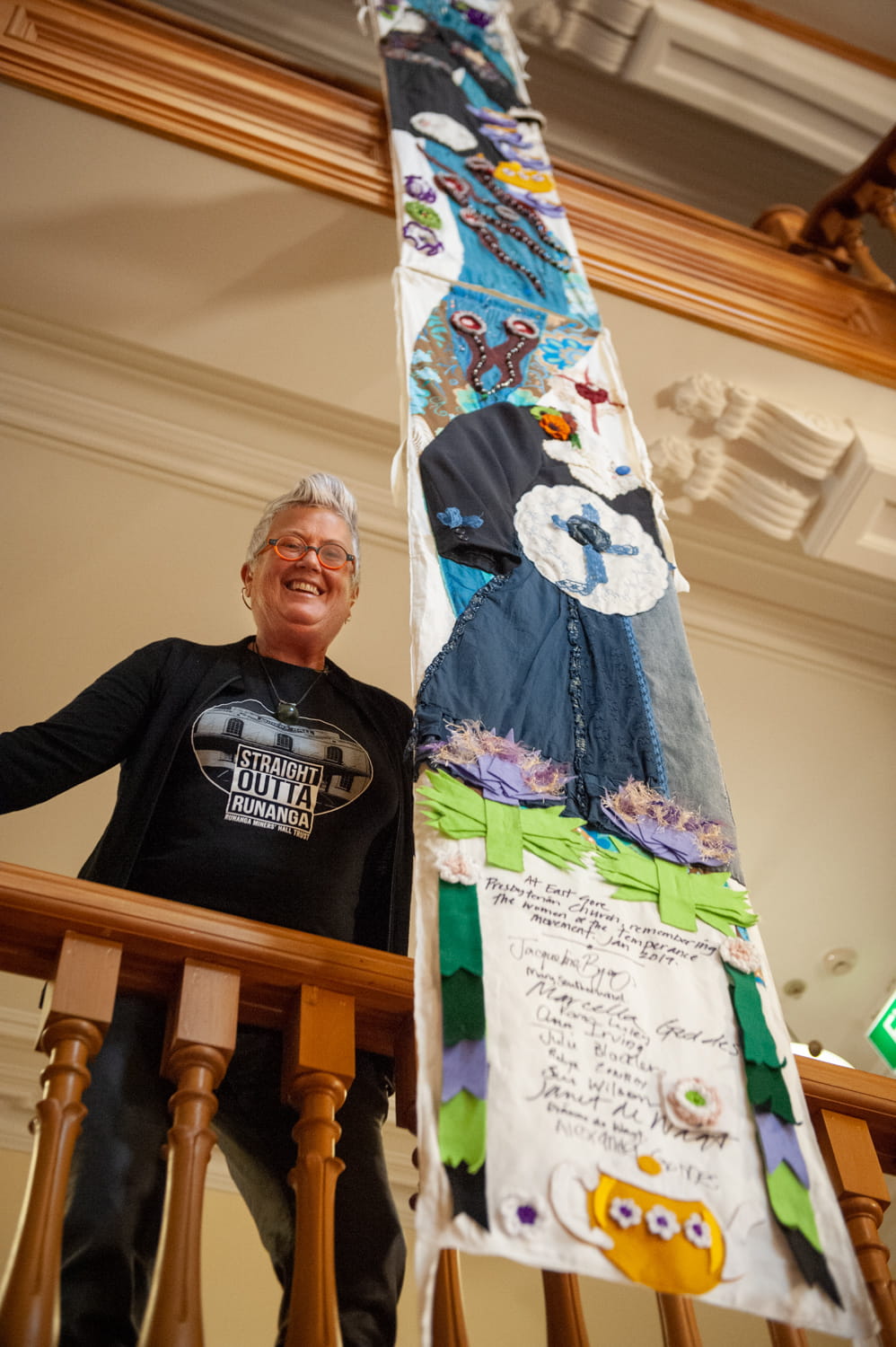