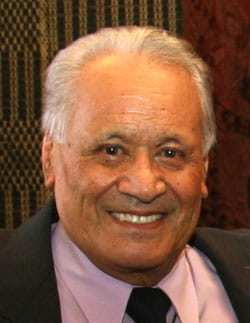 Throughout his career he has exemplified the very best of Māori entertainment and over the last five decades, he has offered a unique Māori voice to the world, not just in music and entertainment, but also in charities and community initiatives. He captured the hearts of NewZealanders and earned his place as a national icon.

“Not just a great artist and entertainer but an outstanding NewZealander” was the resounding message conveyed when in 2007 Dr Ngahuia TeAwekotukua then Chair of Te Waka Toi, the Māori Arts Board of Creative NewZealand, presented Sir Howard with the Te Tohu Tiketike a TeWaka Toi.This is the premiere TeWaka Toi Award for Māori artists who have demonstrated a lifetime commitment to their art and who are leaders in their field.

In recognition of his work he became a distinguished member of the Order of the British Empire 1976 and in 1990 was knighted in recognition of both his talent, and his services to his country, his people and the entertainment industry. Sir Howard Morrison was presented with his TeTohu Tiketike a TeWaka Toi award in Rotorua on September 23 2007.