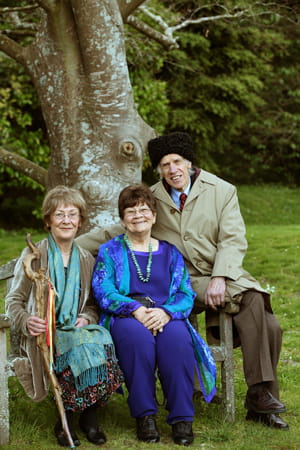 Administered by Creative New Zealand, each writer receives $60,000 in recognition of their significant contribution to New Zealand literature. They were recognised in the categories of non-fiction [James McNeish], poetry [Cilla McQueen] and fiction [Joy Cowley].

Minister for Arts and Culture Christopher Finlayson, presenting the awards on behalf of the Prime Minister said, “I am delighted to see the life work of three more outstanding writers recognised through these awards tonight. The Prime Minister’s Awards for Literary Achievement are some of the most coveted in New Zealand, and government is pleased to support these awards through the Arts Council. It is money well spent in rewarding excellence, raising the profile of our writers, and of course inspiring new works.”

Creative New Zealand Chair Alastair Carruthers thanked the writers for the outstanding contribution they had made to New Zealand literature. “These three writers represent the essence of New Zealand’s literary heritage. Through their work New Zealanders can celebrate this nations cultural identity,” he said.

James McNeish is a novelist, biographer and playwright. Auckland-born he travelled the world as a young man; living and working in a mafia environment in Sicily; working as a deckhand on a Norwegian freighter in the theatre in London, and as a documentary-maker and journalist for the BBC, the Guardian and The Observer. He has written more than 20 books and has received a number of awards and fellowships. His most recent work is the novel The Crime of Huey Dunstan.

Bluff poet Cilla McQueen is the New Zealand Poet Laureate for 2009-2011. McQueen has published 10 volumes of poetry and has won the New Zealand Book Award for Poetry three times. Her first collection, Homing In, also won the 1983 Jessie MacKay Award. McQueen has held the University of Otago’s Burns Fellowship, a Fulbright Visiting Writers’ Fellowship, and in 1991 was awarded the Scholarship in Letters. Her habit of keeping a diary has shaped much of her work, which approaches life as a mixture of moments, casual acquaintances and intimate confessions.

Joy Cowley is internationally recognised for her more than 600 early readers, along with novels and poetry for children. She has worked as a teacher of creative writing for children in more than ten countries and also won critical acclaim for her adult novels and short stories. Among her many awards are the Distinguished Companion of the New Zealand Order of Merit in 2005, the NZ Suffrage Medal, The NZ Commemoration Medal, The A.W. Reed Award for Contribution to New Zealand Literature and the Margaret Mahy Medal. The Storylines Joy Cowley Award for an unpublished picture book text was initiated by the Storylines Trust in 2002.

The Prime Minister’s Awards for Literary Achievement were established in 2003.

Every year, New Zealanders are invited to nominate their choice of an outstanding writer who has made a significant contribution to New Zealand literature in the genres of non-fiction, poetry and fiction. The nominations are assessed by an expert literary panel and recommendations forwarded to the Creative New New Zealand for approval.