Recent seismic events have reminded us all that our best laid plans can be quickly and completely disrupted.

They also gave me an example, once again, of the power of art to distract and uplift.  I was part of a Wellington audience at Silo Theatre’s Hudson and Halls. No doubt we had all been made anxious by myriad aftershocks and were concerned about what the future might bring. For 105 minutes we forgot.  We simply delighted in our night at the theatre.  We went home uplifted, reflective and pleased to have our attention directed to the stage.

Events from the past

We have just published our Annual Report 2015/16. An eagle eyed colleague (thank you David) drew my attention to what had been reported 50 years ago.

In 1966 urgent appeals were made to the Lottery Board of Control for an increase in its allocation for the arts.  The appeal was unsuccessful so the then council, halfway through its financial year, revised its budget with significant implications for the arts organisations it funded.  Happily our 2015/16 year had a much happier ending as the Lotto balls, in June, began falling favourably for us.

Before Lotto I recall, as a youth, making a regular trip with my mother to buy the ‘art union’ ticket.  For mum it was mostly about supporting things, especially the arts, that she believed were important. Notwithstanding the branding changes, no doubt we all know people who play Lotto because they think of it, at least in part, as a donation towards making their communities better.

Our Annual Report 2015/16 describes how we support the arts for the benefit of New Zealanders. A glance at page one will give you a snapshot for those who like summaries, or of course you can go deeper and read the whole thing.

There are some notable achievements that should be celebrated. 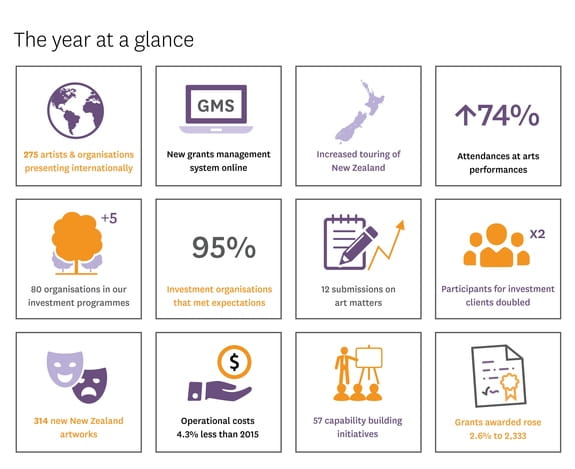 A growing appetite for the arts

We have evidence that points to a growing appetite for the arts that public investment via Creative New Zealand has enabled. Community engagement is up.  Attendances via the organisations we support through our investment programmes – Toi Uru Kahikatea and Toi Tōtara Haemata – now total more than 1.25 million.

Investment of $24.9 million in the organisations supported by these programmes is stretching a long way.  For each dollar invested by Creative New Zealand in the 2015 calendar year, a further $2.80 or thereabouts was invested by patrons, local authorities, regional funding authorities, community trusts and the public.

We have also been thrilled by the way arts community has embraced our online application process - saving them and us money and time.

Reach into every single local authority – from the far north to the deep south and over to the Chatham Islands – via the Creative Communities Scheme is ensuring New Zealanders are engaging with the arts in their communities.

In acknowledging these successes I am of course recognising the terrific work done by those who deliver the arts to the many peoples in the many places of our nation.

What we know is that this work has made our lives better and improved our standard of living through arts and culture. More personally, we can all identify individual and community experiences where the arts have had a significant impact.

And for the future

Written plans are important, but do not have the powers of prophecy. Whether it is the randomness of lotto balls or that of seismic activity, there are often events that demand our attention that don’t feature in the formal planning and 2016/17 looks like being another of those years.