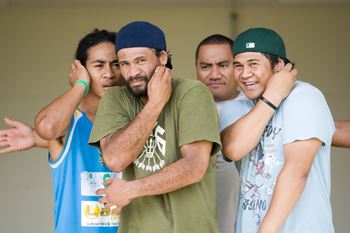 A new play by Lennie James and Massive Company

Havoc in the Garden is a play about familiesabout the lies that parents tell, and children reveal. It is about what holds families together and what tears them apart. It is about minds coming into contact with one another, trying to find harmony… and sometimes only finding Havoc. Havoc in the Garden is a play about five houses on a hill in Auckland. It is about a single act of violence… about a father’s rage against himself and his life. It is about the siege that his rage brings to the hill- forcing five families to face truths about themselves.


will feature an outstanding ensemble cast of 14, a vibrant mix of both emerging and established theatre practitioners. Havoc in the Garden, toured nationally and internationally, including a season at the Royal Court Theatre in London.The Sons of Charlie PaoraIn 2011, Massive Company will present a new work from the acclaimed writer Lennie James. This production sees the continuation of a hugely successful collaboration between Lennie James and Massive Company, whose previous work together,

featuresHavoc in the GardenThe ensemble cast of

2011th – March 26nd in March 2011, and runs in Auckland from March 2Auckland Arts Festival will open at the Havoc in the Garden
More information