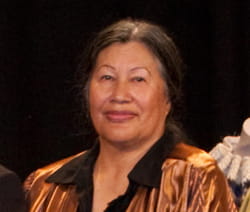 Merata Mita (Ngati Pikiao and Ngaiterangi) died suddenly earlier this week. During her 25 years in the film industry Merata made a significant contribution to Māori and woman’s film and television in New Zealand, and to the international indigenous film networks across the world.

In August 2009 Te Waka Toi awarded Merata with the Te Tohu Toi Ke – “Making a difference” award, and in the 2010 Queen’s New Year’s Honours she received a Companion of the New Zealand Order of Merit for service to the film industry.

Merata was the first New Zealand woman to write and direct a dramatic feature film, MAURI, (1988), after a lengthy career as a documentary filmmaker. Her expertise and knowledge of film-making and indigenous culture meant she was a sought after contributor to panels and workshops in New Zealand and internationally.

In 2005 the First Nations First Features Program, featured her film MAURI at the Museum Of Modern Art (MOMA) in New York, and the Smithsonian Institutions National Museum of the American Indian in Washington, DC.
Merata was an Assistant Professor at the Academy of Creative Media, University of Hawai’i where she taught courses in indigenous screenwriting, aesthetics and production. Throughout her career she contributed to and supported film-making by indigenous peoples as an advisor, creative advisor, patron and board member for a range of organisations and events.