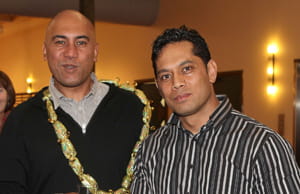 A pioneer of contemporary Pacific art is among the five recipients being honoured in Wellington tonight at the Creative New Zealand Arts Pasifika Awards 2010.

Renowned for his innovative and varied work, Michel Tuffery M.N.Z.Mis the 2010 recipient of the Contemporary Pacific Artist’s Award. The award recognises the artist’s exemplary career and contribution he has made in bringing a New Zealand-born Pacific experience to the centre of contemporary New Zealand art.

Tuffery joins a stellar line up of recipients including the first Samoan weaver to join the New Zealand Weavers Committee, a young Tokelauan dance group which was formed to teach the next generation about their traditional performing arts, a rising young Samoan opera star who also helps young South Auckland hip-hop/RnB artists and a former Tongan naval electrician turned innovative carver.

Pele Walker, Chair of the Pacific Arts Committee, says the awards are a time to reflect on the collective cultural wealth of Pacific artists living in New Zealand.“From those artists working to preserve the traditions of our homelands such as Misa Emma Kesha, to those like Michel Tuffery who are forging new paths with new technologies, these awards celebrate the contribution Pacific artists are making to express their unique experiences in New Zealand.”

Offered annually since 1996 the Arts Pasifika Awards are an opportunity for Creative New Zealand to encourage and celebrate excellence in Pacific arts in New Zealand. They are the only national awards that recognise Pasifika artists across a range of artforms – from contemporary to heritage and across a range of stages in the artists’ careers from emerging to established.

Read about the recipients