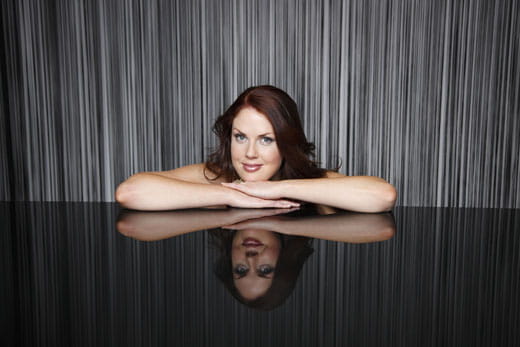 Finding a gap in Annas busy schedule was no mean feat for General Director Aidan Lang when he began casting for the opera. "We knew we wanted Anna for the role of Tatyana, but her diary is very full," he says, "and not with insignificant engagements either. Anna has recently sung principal roles for the Royal Opera House Covent Garden and Canadian Opera and after appearing with us she heads to Cologne and Antwerp. Shes starting to carve out a very successful international career for herself and is someone New Zealanders can be proud to call their own."

While Anna has sung with some of the major international opera houses and performed alongside the likes of José Carreras, Andrea Bocelli and Dame Kiri Te Kanawa, returning to her homeland to make her debut with The NBR New Zealand Opera is a real thrill for her.

"I miss New Zealand and would come back with very little persuasion." she says. "In an ideal world I would base my career from here but it’s just not possible to do that at this stage – one day maybe... In the meantime, I’m thrilled to be back and singing Tatyana. Eugene Onegin is a very believable opera," she says, “with events that could easily happen in real life. And Tatyana is quite the modern heroine."

Joining Anna on stage to sing the title role is the UK’s William Dazeley, one of the leading baritones of his generation who has already appeared with many of the world’s great opera houses. Russian tenor Roman Shulackoff, who recently won first prize and the audience prize of the prestigious International Singing Competition in Strasbourg, joins them in the role of Lensky. A strong New Zealand cast take the other principal roles: Patricia Wright as Madame Larina, Andrew Glover as Monsieur Triquet, Kristen Darragh as Olga, and one of New Zealand’s greatest exports, Dunedin bass Martin Snell, returns to these shores and his NBR New Zealand Opera debut to sing Prince Gremin. Established Opera Australia mezzo Rosemary Gunn sings Filipievna, New Zealanders Roger Wilson and Richard Green share the role of Zaretski, and Dame Malvina Major PwC Emerging Artist Daniel O’Connor is A Captain.

Set in 19th-century Russia and based on Alexander Pushkins novel, Eugene Onegin is opera on a magnificent scale with all the opulence and grandeur of the era. Musically, visually and dramatically, Tchaikovskys great opera is a night to remember. Opening in Auckland on 17 September and Wellington on 10 October, The NBR New Zealand Operas Genesis Energy season of Eugene Onegin is sung in Russian with English surtitles.