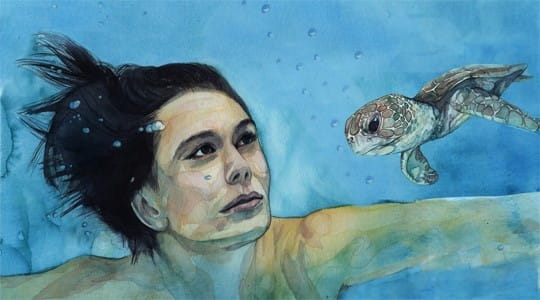 “…Red Leap Theatre could perform imaginative feats that are faster than a locomotive and leap tall buildings in a single bound...” Zhou Ting-Fung, Theatreview

From the award-winning team that brought you The Arrival, Red Leap Theatre’s highly anticipated new work SEA premieres at the Maidment Theatre from 6-10 March 2014.

An ensemble of nine highly skilled performers brings this dynamic physical theatre tale to life. Striking imagery including an array of marvellous sea creatures combine with the power of the imagination to create a gripping story for people of all ages and cultures.

A young man is washed up on a drifting island. The people take him in as a welcome fishing omen, bringing with him an abundant catch. However, the people are not who he thought they were and the man begins to fear for his life and the sea.

As New Zealanders, we live on an island at the bottom of one of the largest oceans on the planet. Our lives, our memories and our childhoods are shaped by the sea. The seed for this work started with a fascination for the humpback whale and its migration songs. This evolved into the company beginning to better understand the plight of the world’s oceans where around 90% of its large fish have disappeared in the last 100 years. From this starting point Red Leap Theatre began the journey of developing and creating this beautiful new work.

Red Leap Theatre is New Zealand’s leading image and movement based theatre company established to develop artists, audiences and the discipline of devised physical theatre. Artistic Directors Kate Parker and Julie Nolan have delivered two Auckland Arts Festival commissions – The Arrival in 2009 and Paper Sky in 2011. These works have been highly successfully both at home and abroad touring to overseas centres including Sydney, South Korea, Taiwan, Macau and Hong Kong. The company have also been the recipients of eight Chapman Tripp Theatre Awards.