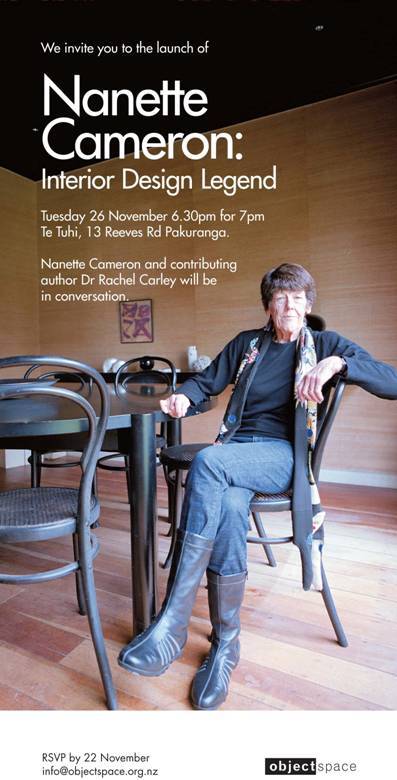 The 128 page publication designed by Starblock features two substantial essays “Nanette Cameron and the development of interior design in New Zealand” by Dr Rachel Carley and “My Life in Design” by Nanette Cameron along with a conversation with Nanette & Kirsty Cameron and designer Katie Lockhart.  Accompanying the book is a poster featuring copies of Nanette’s writing and styling for magazines in the 1970s and 1980s.

To mark the launch, Nanette will be in conversation with Rachel Carley from 7pm on 26 November 2013 at Te Tuhi Pakuranga. Nanette will also be signing copies of the publication at Objectspace, 30 November, 2.00-4.00pm.

The publication accompanies the current exhibition at Objectspace, that recognises the achievements and legacy of a woman, who has played a seminal role in interior design. For more than five decades, Nanette has inspired and empowered thousands of women by introducing them to art and design through her school in Pakuranga. Her passion and influence are still alive today and she continues to travel and teach.

The focus of the exhibition – The Blue Room - designed by Nanette Cameron with Katie Lockhart demonstrates her design values and sensibilities.  It includes works from her private collection and new works chosen for the installation. The curatorial team includes felm maker and costume designer Kirsty Cameron, Katie Lockhart, who is an interior designer and stylist, and producer Vivienne Stone.

Nanette Cameron established the first interior design school in New Zealand, before the introduction of interior design in tertiary organisations. As well as an educator, she has been a practitioner, advocate, and commentator on interior design, plus an influential conduit between interior design and the worlds of architecture and the visual arts.

A video in the exhibition features commentary on Nanette and her work by students and designers including architects, Pete Bossley, Nicholas Stevens, and Pip Cheshire.

Says Cheshire: “Nanette has created a cadre of highly articulate clients. Her students, as clients are willing to examine and embrace new ideas, and with better informed clients you are going to get better architecture.”

Objectspace Director Philip Clarke notes in the publication “Nanette’s approach to design is one that integrates an interest and awareness of contemporary art and architecture, environmental and social issues with individual and social development. This approach aligns with a contemporary view that interior design is inherently an interdisciplinary practice, being a dialogue formed by architecture, art, fashion, film, engineering, history, literature, photography, philosophy, product design and textiles”