And now she steals my goddamn garter. 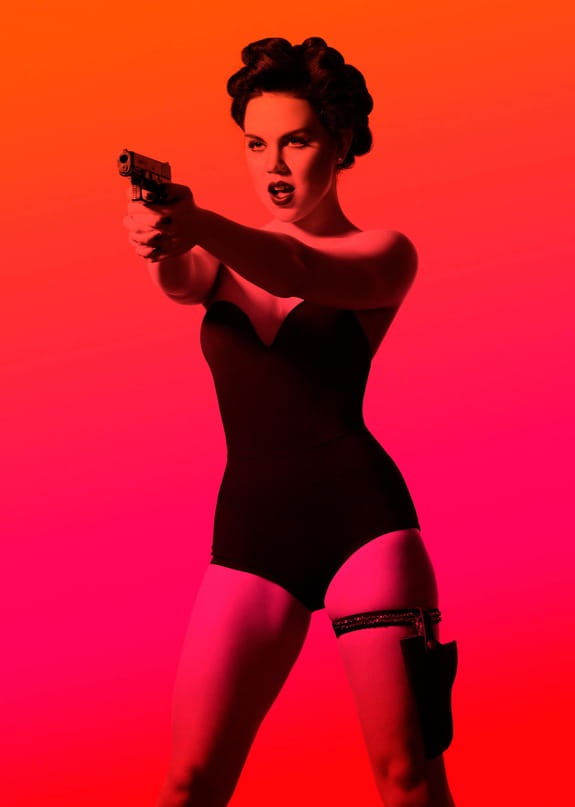 1920s, Chicago. Cook County Jail is home to a bawdy band of murderesses, all of whom have eradicated their quickly insignificant others. Chanteuses Velma Kelly (Lucy Lawless) and Roxie Hart (Amanda Billings) have both acquired a spot on Death Row. Velma enlists the help of prison matron Mama Morton (Colleen Davis) and smooth-talking lawyer Billy Flynn (Shane Cortese) to turn her incarceration into a media frenzy. But, not one to rest on her laurels, Roxie comes up with a foxy plan to steal back the limelight and, instead of wrangling the law, the two divas find themselves fighting the ultimate battle – the race to superstardom.

Set in the legendary city during the Roaring Twenties, an era renowned for organised crime, alcohol prohibition and the very best jazz, Michael Hurst's version of this razor-sharp show about bad girls behaving badly will bring all the sass, brass and a%$e of his most recent Auckland Theatre Company musical Cabaret (2010).

Of the production, Director Michael Hurst said, “The thing about Chicago is that it underneath all the jazz and the fizz is the pulsing, wild, abandoned and desperate beating heart of a corrupt and exploitative society. It’s a dark, sexy and vicious tale, propelled by extraordinary music – the rhythms of murder and corruption; the rhythms of lust. It’s a revelatory tale of the transience of celebrity. And it’s fabulous.”

Auckland Theatre Company Artistic Director, Colin McColl, said, “The longest-running American musical ever to play the West End, Chicago has garnered a stash of glitzy awards in many revivals worldwide. Michael’s production stars the hottest cast of the year including Lucy Lawless, fresh from her role as Mama Morton in Chicago at the Hollywood Bowl alongside Brooke Shields, Stephen Moyer and Ashlee Simpson.”

One of the most famous shows of all time, Chicago contains all the elements of an unadulterated musical – celebrity, scandal, corruption, scantily-clad women and serious jazz hands. With a soundtrack that includes the show-stoppers All That Jazz, Razzle Dazzle, When You're Good to Momma and Class, the winner of six Tony Awards, two Oliviers and a Grammy will envelop the Q Auditorium for an unmissable season.