Petrina Thomas-Chisholm, who is playing the lead role of Sandy in the Tauranga Musical Theatre production of Grease, has a powerful reason to applaud the theatre’s audio described performance of the musical. Her 12-year-old son, Levi, is legally blind.

Petrina Thomas-Chisholm, who is playing the lead role of Sandy in the Tauranga Musical Theatre production of Grease, has a powerful reason to applaud the theatre’s audio described performance of the musical. Her 12-year-old son, Levi, is legally blind.

When Petrina read on Facebook about the audio described performance on 17 September, she posted a comment: “Love it! As a mother of a son who is legally blind, I am so very much behind this! Well done, so thoughtful, and yay to giving back to the community! Sandy's definitely backing this one!”

Petrina was a professional actor and singer before coming to Tauranga to live with her family. She now teaches drama at Otumoetai College.

“My husband and our three kids have already booked tickets to the show but when I told Levi about the audio described performance and what it involved, he was keen to experience it.”

For people who have never experienced audio description, a discrete earpiece allows you to tune into a live narrator called an audio describer. In between gaps in the dialogue, the audio describer explains the way the stage looks, the visual elements of the show, and how the characters move and interact.

Petrina’s previous involvement with Tauranga Musical Theatre was in 2010 with Miss Saigon, where she was vocal director and one of the lead characters.

“I’m a fulltime working mother so I can’t do as much as I used to. But when the right show comes along I go for it,” she says. “I love musical theatre and the character of Sandy. I used to come home from intermediate school every day and watch either The Sound of Music or Grease.”

Rita Carter, who is vision impaired and an enthusiastic follower of Tauranga Musical Theatre productions, always sits near the front and takes her binoculars. A member of the local branch of the Royal New Zealand Foundation of the Blind, she also represents the foundation on the access group of Tauranga City Council and Western Bays Regional Council. 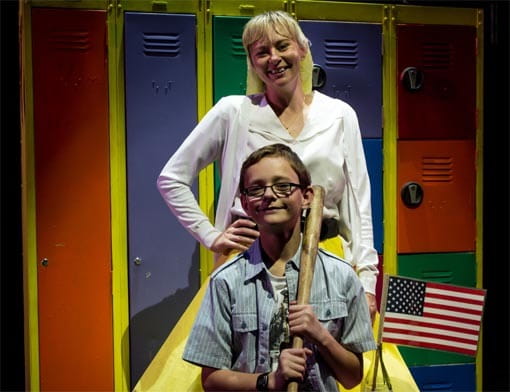 “I believe this is the first-ever audio described performance in the Bay and I say, ‘Good on them’. I approve wholeheartedly and I hope other groups will be encouraged to include audio description as part of their activities.”

Before the performance, there will be a touch tour at 6pm where patrons will be welcomed on stage, meet the director and lead cast members, touch and explore the set and costumes, hear sample vocal snippets and ask questions.

Following the touch tour, patrons are invited to join the Friends of Baycourt in the exhibition space for drinks, nibbles and a chance to chat further with the director and Tauranga Musical Theatre’s president. This will begin at 7pm. From 7.30pm, a sound technician for Grease will provide patrons with audio headsets, help to fit them if required, and give instructions on how to use the equipment. It is important to allow time for the technician to do this so patrons are seat for curtain up at 8pm.

Nicola Owen, an experience audio describer from Auckland, will be narrating the show and says that audio description does not disrupt the performance for other members of the audience.

Theatre guides will be available to support patrons throughout the evening. Please let the Baycourt Box office know you are booking for the audio described show and/or the touch tour, and if you require a theatre guide. Also let them know if you are bringing a guide dog or have any other specific requirements.

The audio described performance is on Tuesday 17 September 2013, at Baycourt Community and Arts Centre, 38 Durham Street, Tauranga.  Parking is available via Hamilton Street, and additional parking, for those displaying a Disability Card, will be reserved for you at the Willow St entrance to Baycourt.