Cities around the world are gifting streets lamps to Christchurch as part of the work of art entitled Solidarity Grid by German artist Mischa Kuball.

Solidarity Grid is a creative infrastructure replacement project for Christchurch. The installation consists of 21 operational street lamps from cities around the world which will be installed over the next three years along the walkway to the east of North Hagley Park on Park Terrace.

The Christchurch City Council’s Public Art Advisory Group has commissioned Mischa Kuball to create the installation which is being project managed by SCAPE Public Art for commencement on the occasion of the SCAPE 7 Public Art Christchurch Biennial.

“Mischa’s response to the Christchurch environment is both creative and intelligent,” says Bob Parker, Mayor of Christchurch. “On one level his work has a functional purpose – providing street lights on a previously un-lit footpath. On another he is installing something of beauty; but on a third level he is opening up conversation and communication between the people of Christchurch and those of cities around the world.”

The project has been more than two years in the planning, starting with a post-earthquake visit to Christchurch by Kuball. He says, “As an artist I am eager to contribute to Christchurch and through my project Solidarity Grid I hope to make people around the world aware of the major urban change taking place in Christchurch.”

“The positive involvement of partner cities in this project will contribute to a new and different kind of urban construction in Christchurch” he continues. 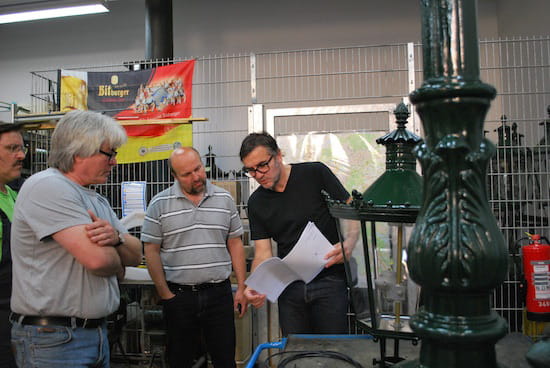 The first street lamp’s installation will be celebrated as part of the SCAPE 7 Public Art Christchurch Biennial celebrations, 27 September – 9 November 2013. The street lamp, a gift from Düsseldorf, is one of those currently installed in the historical area of the city, a replica of the old Düsseldorf gaslights.  It has been re-engineered to operate as part of the Christchurch public streetlight grid.

Further street lamps are currently being shipped to Christchurch for installation during SCAPE 7. Among these are street lamps from the cities of Belgrade (Serbia), Kurashiki (Japan), Adelaide and Sydney (Australia).

Blair French, Curator of SCAPE 7 says "It has been a pleasure to work with Mischa on this project. It has evolved over two years of discussion and the artist's close consideration of the post-earthquake environment of Christchurch. He has responded in a typically intelligent and perceptive manner to the needs of the city as well as the curatorial direction for this biennial. It will be a delight to see it evolve and grow along Park Terrace." 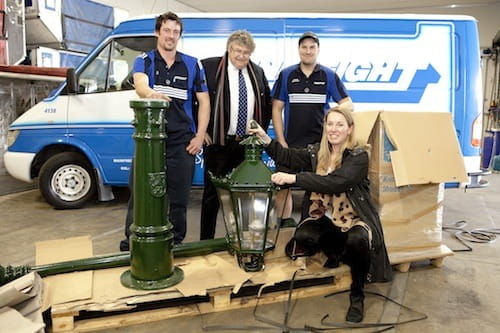 “It’s a pleasure be part of bringing light back in to Christchurch”, says Neil Graham who has sponsored and commissioned Mainfreight to bring the lights from around the globe to Christchurch. “Mainfreight’s staff have embraced the project with great vigour and are pulling out all the stops across their global network to make Solidarity Grid work for the people of our city.”

Solidarity Grid is part of a larger global series of works of art by the artist. Public Preposition was started by the artist in 2009 at the Venice Biennale with an unique series of temporary and permanent interventions in public spheres around the world; most recently in Bern, Switzerland and Katowice, Poland.

Mischa Kuball is an award-winning artist and academic whose primary interest is in light and space with public and institutional spheres. Using the medium of light – in installation and photography – he explores architectural spaces and contributes to social and political discourses.

The official dedication of Solidarity Grid by The Christchurch Mayor, Bob Parker, the artist and sponsors will be held on-site on Saturday 28 September 2013 at 3pm.

Second: Mischa Kuball preparing for the shipping of the street lamp with the manufacturers in Düsseldorf. (Photo © Studio Mischa Kuball, Düsseldorf 2013).