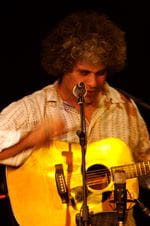 Of Nigerian and English ancestry, Paul was classically trained in cello and guitar but brings a global perspective to his music, combining highly original interpretations of classic songs such as "The House of the Rising Sun" with originals. He crosses genres of blues, soul, groove and folk, with Indian tunings and an impressive finger-picking technique.

Often compared to a more acoustic Jimi Hendrix, Joe Shepherd (Salient) says "Not since Johnny Cash have I seen someone that can so powerfully forge his own shape out of other peoples songs. His own songs stand up admirably next to these classics, as if his strong performances couldnt possibly be played to anything but the most thoughtfully conceived songs."

Ubana Jones tours internationally seven months of the year and makes this event a rare visit to Wellington. Excited by the possibility of playing a theatre space, he promises a magic night.

" . marvellous control and devastating rhythms. one of the few solo acts people sit up and listen to, such is the force of the mans playing technique and stage presence" Graham Reid, New Zealand Herald
"In another country he would be a national institution!" Simon Sweetman, Sunday Star Times