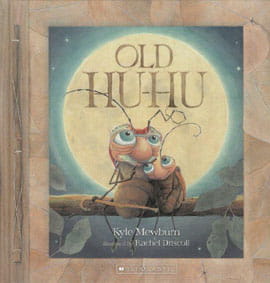 The work, which is also published in te reo as Hū-Hū Koroheke translated by Kāterina Te Heikōkō Mataira, is described by New Zealand Post Children’s Book Awards judges’ convenor, Rosemary Tisdall as a beautifully and sensitively told story of the loss of a special friend, which helps to explain death and will reassure young children that the spirit of someone can still live on.

‘From the endpapers to the specially created font, this book is the complete package. It is a tender story that focuses on the positive aspects of growing old without succumbing to sentimentality.

‘Driscoll has also performed the amazing feat of making one of New Zealand’s ugliest insects into heroic and loveable ﬁgures,’ says Mrs Tisdall.

The Awards’ Te Reo Advisor, Paora Tibble said the text in Hū-Hū Koroheke was descriptive and rich in terms of the kupu (words), reflecting the original English version.

‘Dr Mataira could have written a ‘straight translation’, but she has created beautiful word pictures to complement the illustrations.’

The judging panel, which also included reviewer Trevor Agnew, and former journalist, now children’s bookshop co-owner, Ruth McIntyre collectively stated that it was a real privilege to have read such a wide cross-section of New Zealand books and commented that they were excited by the obvious effort made to raise the quality of publication.

‘New Zealand children’s writing is going from strength to strength with writers continuing to come up with original, challenging ideas. Several writers pulled out all the stops to create a real step up from their previous writing.

‘One sixth of the submissions were from new writers – and many of these first books were brilliant, showing enormous promise. We look forward to seeing many of them represented in the finalist list in future.’

Another picture book, The Wonky Donkey won the coveted 2010 Children’s Choice Award. This prize is much sought-after by authors as a true mark of their audience’s opinion. The hilarious, rhythmical story about a bad-tempered, braying mule, written by Craig Smith and illustrated by Katz Cowley, won by a clear majority this year.

The full list of Category Award winners and the Honour Award recipient in the 2010 New Zealand Post Children’s Book Awards are:

An Honour Award was presented in the Picture Book Category this year. This Award is discretionary and is awarded in recognition of particular features in a book. The Honour Award recipient received $500.