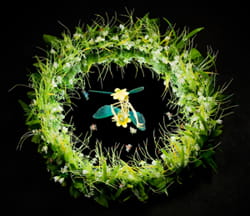 Picture this: A darkened gallery.Shutters closed.Lights off.Stand at the doorway and take in the four jewel-like lightworks glowing in front of you.The only light comes from the works themselves, creating an aura, ethereal and luminous, inviting you to enter.

Inspired by the 17th century Flemish Vanitas tradition, the works form a biblical tableau of Adam and Eve, before and after the fall; the Crucifixion; and a work created specifically for this show, a scene from the final book Revelations.

“Symbols, materials and media combine to form a unique visual language in works that reflect upon the fleeting nature of life, the validity of faith and the inevitability of death,” Hastings-McFall says.

The use of light references the divine, a traditional device seen frequently throughout Western European art over many centuries.Hastings-McFall also draws on her own Christian upbringing and mixed Polynesian and English heritage and culture, especially the Samoan concept of the Va as a liminal shifting space that unites separate yet related entities within a shared context. Two of her new works from the ongoing Va series will be exhibited on the wall opposite the lightworks to have Christianity and early Polynesian religious beliefs facing each other across the expanse.

The mortality of our disposable world has long been a part of Hastings-McFall’s work and again she makes use of this, creating the works from recycling or reincarnating materials deemed past their use by date, relegated to the scrap heap or left for dead – albeit her interpretation of the relevance and need to reuse material in today’s consumer society is communicated with wit.

“The nature of the materials means these works constantly move in relation to the viewer’s standpoint,” she says.“The representations of two different cultures will face each other across the space in a contemplative, reflective conversation.”