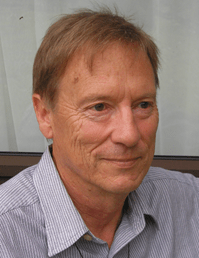 Mr Elmsly is a distinguished composer, who recently retired from the University of Auckland after a long and successful teaching career specialising in composition.

He is originally a graduate of Victoria, where he began electronic music composition with internationally renowned composer Douglas Lilburn.

“He will become part of an incredible legacy of composers who have contributed to the life of the School and to Wellington.

“We are grateful for the ongoing support received from Jack Richards and Creative New Zealand that makes this residency possible.

“It is extra special to have John with us on the occasion of the 100th anniversary of Douglas Lilburn’s birth in November.”

Mr Elmsly will take up his year’s residency in July 2015 and says it provides a wonderful opportunity to strengthen his ties with Wellington-based performers and musical organisations, as well as to interact with people at Victoria.

“I’m keen to explore as widely as possible ways to collaborate with film and video makers, writers and dancers,” he says. “I also hope to have chances to compose for some of our younger and developing performers.”

He has recently had new works premiered by the Jade Quartet, NZTrio, Magic Flutes ensemble and recorder player Kevin Kim.

The current Composer-in-Residence, David Long, who is over halfway through his residency, says it has allowed him to explore different ways of composing and to begin a number of projects.

“Alongside all the writing I’m doing, I’ve loved meeting and talking with Victoria students.

“In February I’m taking some of them to Park Road Post to observe a film mix for a short film I composed for last year. Then, from March, I’m going to take a group through the scoring of a feature documentary.”

Mr Long has almost completed an 18-minute piece for chamber orchestra, ready for performance in Wellington. His new music can be heard at the Auckland Writers & Readers Festival in May, in a performance with Scottish poet Carol Ann Duffy.

The Composer-in-Residence position was established in 2004 to involve composers in the life of the School, which has about 100 students studying composition. The position also provides one of the best professional development opportunities in the country for established New Zealand composers.

A comprehensive package is offered including a salary and accommodation in the former home of Douglas Lilburn in Thorndon. There is also an agreement to record and publish one work during the residency and to film the recording in collaboration with the Centre for New Zealand Music (SOUNZ). Several past recipients have returned to New Zealand from overseas to take up the residency.