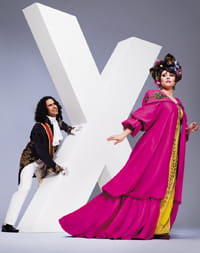 Prada, Armani, Lacroix, Gaultier, Versace, Dior, Chanel – many of the world’s leading designers have put their creativity to work on costumes for opera, ballet and theatre. So it was only a matter of time before New Zealand designer Trelise Cooper did likewise.

In March, The NBR New Zealand Opera’s production of Handel’s Xerxes sees Trelise Cooper move from the catwalk to the opera stage. Trelise, who openly admits to loving the theatre of fashion, has also always loved opera, so designing opera costumes was a natural progression. “Xerxes has all the drama, romance, intrigue, intense love and yearning passion that makes great opera, so designing the costumes has been heaven for me,” she says. After it was decided to home in on the baroque period in which Xerxes was written, rather than the ancient times (400BC) of the titular king, Trelise was given unlimited freedom to go either modern or period. “I chose to combine the two,” she says, “so there’s a contemporary feel to the garments even though their style is 18th century. What I love most about this collection is that I’ve been able to do embellishment full-on and combine that with beautiful clear colours in garments that have a bold and playful sense of theatre about them.”

General Director of The NBR New Zealand Opera, Aidan Lang, concurs: “There’s a real theatricality to Trelise’s fashion collections,” he says. “In a sense, her style and the way she uses fabric and colour is ‘operatic’, and this has definitely shone through in her Xerxes costumes. She’s created a multi-coloured opulence that contrasts perfectly with the light palette of designer John Verryt’s beautiful set.”

The richness of this production doesn’t end with the costumes and set. Lang says that Handel was one of the truly great opera composers of all time. “The music of Xerxes is full of gorgeous melodies, including one of opera’s most beautiful and recognisable arias, the famous Largo,” he says. “This is sublime music, with an exciting, clean, early music sound, and we’re thrilled that Wolfgang Katschner and his superb period orchestra, the Lautten Compagney, are coming to New Zealand from Berlin especially to accompany Xerxes. What you’ll hear is exactly what Handel intended when he wrote the opera 300 years ago.”

Lang adds: “We also have a world-class director in Australian Roger Hodgman. Roger has pulled everything together seamlessly to create a production that, as the first professional, fully staged Handel opera that has ever been presented to New Zealand audiences, will be long remembered. Roger brings out the best in singers and we’ve secured some of the best for this opera.” In the core principal roles Australians Tobias Cole (counter tenor) and Tiffany Speight (soprano) sing Xerxes and Romilda. English counter tenor William Purefoy takes the role of Arsamene, and Australian soprano Amy Wilkinson is Atalanta. Returning from overseas are New Zealanders Kristen Darragh (mezzo soprano) and Martin Snell (bass) to sing Amastre and Ariodate respectively, and Australian bass Stephen Bennett is Elviro.

Xerxes is a co-production between The NBR New Zealand Opera and Victorian Opera in Melbourne, in association with Auckland Arts Festival. It is sung in Italian with English surtitles and opens at The Civic in Auckland on Wednesday 2 March and at the St James in Wellington on Tuesday 15 March.

“Xerxes is witty comedy combined with deliciously beautiful music performed in the most sumptuous costumes. This production is one of the best ads for opera that I know.” – Tobias Cole, who sings the role of Xerxes