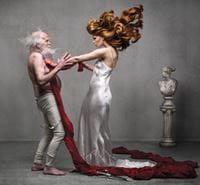 Verdi wrote of Shakespeare’s play Macbeth: “This tragedy is one of the greatest of human creations! If we do not manage to make something truly grand of it, at least let us try to do something out of the ordinary.” Driven by a faithfulness to the spirit of Shakespeare, Verdi created a work that was propelled as a drama as much as it was as an opera. As such, it calls for outstanding singers who are also compelling actors, who at a pinch could be cast at the Royal Shakespeare Company.

The NBR New Zealand Opera’s Genesis Energy season of Macbeth is a restaging of Tim Albery’s award-winning production, created for Opera North in the UK in 2008. In that production, as with its New Zealand staging, Italian soprano Antonia Cifrone sings Lady Macbeth. Accolades for her 2008 portrayal of Macbeth’s infamous spouse ranged from “commanding vocally and dramatically, but not at the expense of a certain seductiveness” [The Independent] to “the most convincing and musically vivid performer of the role I have seen” [Spectator].

General Director of The NBR New Zealand Opera Aidan Lang says “Lady Macbeth has greater prominence in the opera than she does in the play, and hers is a very difficult role. It demands a dramatic soprano with huge intensity as a performer, both dramatically and vocally, while also requiring of her moments of vocal grace and elegance. The two don’t necessarily go hand in hand, but Antonia Cifrone is uniquely suited to this role. She will do justice to the contrasting, almost contradictory demands the role brings.”

The vocal and dramatic intensity required of the singers doesn’t stop with Lady Macbeth. For Romanian Michele Kalmandi, the great baritone role of the haunted Macbeth is one he relishes. His portrayal last year for Royal Swedish Opera was met with high praise, ClassicalSource.com describing his baritone as “strong, penetrating, rich and coloured and he has a wonderful sense of line. Each of Macbeth’s big scenes and arias were cleverly characterised by both physical and vocal means.”

The first of Verdi’s three Shakespeare operas, Macbeth is the classic tale of ambition, corruption and bloody revenge, illustrating with shocking clarity the trail of death and destruction caused by an unbridled lust for power.

“This is an example of enthralling operatic drama at its very best,” Lang says. “And as the essence of this production is a seamless melding of opera with drama, don’t be surprised if you come away from this opera thinking that you’ve just seen a sung version of the actual play.”

An Opera North production; Sung in Italian with English subtitles.

With the Chapman Tripp Opera Chorus

Accompanied by the Auckland Philharmonia Orchestra and the Vector Wellington Orchestra