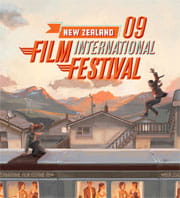 "With this evolution of the Festival name we celebrate that the Festival is a national event taking place throughout New Zealand. As far as we know ours is the only national film festival of its kind in the world - one in which a centrally curated programme is delivered in different forms to different regions within the one country," says Festival Director Bill Gosden.

The Festival which starts in Auckland on July 9 will then travel around the country finishing in Whangarei in November. Until now each region has been promoted with the regions name despite sharing a common programme and artwork since 2002. The Festival has grown nationally since the merging in 1984 of the Auckland International Film Festival (founded in 1969) and the Wellington Film Festival (1972).

This years logo and poster artwork, developed by Wellington design company Ocean Design, reflects the theme of a travelling event.

"Ocean have done an outstanding job refreshing the logo with the Festival taking the form of a luxury express train moving through a distinctively Kiwi townscape. Cinema has that ability to transport us to other places and times and this years logo is all about trains, boats and planes." says Gosden.

A number of films have already been announced for the 2009 programme, including NZ feature The Strength of Water, Soderberghs Che, Oscar winner Departures and major German hit The Baader Meinhof Complex.

Further updates will be made on the Festival website www.nzff.co.nz until the full programmes are announced for each city from mid-June.

Regions and dates for the New Zealand International Film Festival 2009:

For further information about the NZ International Film Festival or to arrange an interview with Director Bill Gosden please contact: