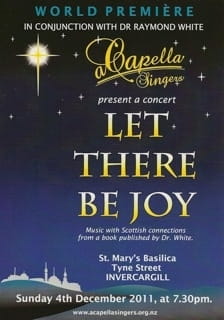 The A Capella Singers are putting on a concert in Invercargill at the end of the year. The concert will comprise mainly items from a book entitled Let There Be Joy recently published by Dr. Raymond White, containing a dozen pieces of music with Scottish connections for Advent, Christmas and Epiphany. The music is in the Gaelic folk-carol tradition of monks in monasteries and choristers in cathedrals. This concert will be a world premiere of settings of  carols contained in the book, which comes highly recommended by Otago University musicians Judy Bellingham and Emeritus Professor Colin Gibson. Dr. Raymond White is a fourth-generation New Zealander and one of the country’s finest organists. He has studied and performed widely overseas where the Royal School of Church Music presented him with its diploma for distinguished service to church music. Dr. White is organist at St. Mary’s Basilica in Invercargill where the concert will be performed on Sunday 4th December 2011 at 7.30 pm at St. Mary’s Basilica in Invercargill. He is looking forward to these compositions being presented by the choir with instrumental accompaniment.