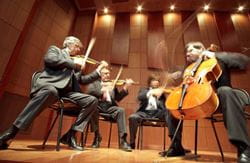 Five world premieres of New Zealand theatre and classical music will be showcased at the New Zealand International Arts Festival in Marchthis year.
“The 2010 Festival’s New Zealand programme combines the strength of work that has undergone extensive development as part of our RESTAGE initiative, along with a stand-out selection of world premieres of New Zealand work offering a range of experiences,” says Lissa Twomey, Artistic Director New Zealand International Arts Festival.
Taki Rua Productions premieres Mark Twain &amp; Me in Māoriland. This bullet ridden comic tale is inspired by the true events of Mark Twain’s Australasian lecture tour at the end of the 19th century when the outspoken writer incurred the wrath of the local English establishment.
Written by David Geary and directed by Anna Marbrook, Mark Twain &amp; Me in Māoriland navigates the complexities and contradictions of colonisation.
The highly anticipated season of 360 premieres during Festival 2010 at Te Whaea National Dance and Drama Centre. Chapman Tripp Theatre Award winners Carl Bland, Ben Crowder and Peta Rutter reunite for this innovative production that seats the audience on swivel chairs in the middle of a circular stage.
Looking outwards the audience is surrounded by 360 degrees of theatre action as the story of the prodigal son unfolds when he opens a door to the past he left behind. Their last collaboration, Head, won them a Chapman Tripp Award for most original production in 2005.
Three world premieres by New Zealand composers are highlighted in the Festival’s spectacular Chamber Music Weekend - two days of continuous classical music experiences at the Ilott Theatre and the Wellington Town Hall on 6 and 7 March.
David Downes’ latest work Kingdom for piano, violin and cello will be premiered by NZTrio.
Jenny McLeod’s Peaks of Cloud, a song cycle for tenor and piano to poems by Janet Frame, will be premiered by New Zealand tenor Keith Lewis and pianist Michael Houstoun. And Ross Harris’ The Abiding Tides weaves the poems of Vincent O’Sullivan with the artistry of the New Zealand String Quartet and soprano Jenny Wollerman.
“New Zealanders can celebrate and feel proud of this selection of new New Zealand works,” says Twomey.
The RESTAGE initiative is supported by the Major Events Development Fund. Mark Twain &amp; Me in Māoriland is sponsored by the New Zealand Listener with support from Creative New Zealand and Te Puni Kōkiri. 360 and The Chamber Music Weekend is supported by Creative New Zealand.