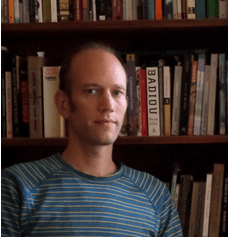 The Victoria University of Wellington/Creative New Zealand Writer in Residence for 2015 is novelist and essayist Dr Tim Corballis.

The award represents something of a welcome back to Victoria for Tim, who won the Adam Foundation Prize in 2000 for his Master of Arts thesis which became his first novel, Below. He has subsequently published two other novels—Measurement and The Fossil Pits.

Tim also held the Randall Cottage Writers’ Residency in 2003 and the Creative New Zealand Berlin Writers’ Residency in 2005 to 2006.
He recently completed a PhD at The University of Auckland on aesthetic theory in the context of the Antipodes and he sees this theoretical work as closely informing all of his creative practice.
Next year, Victoria University Press will publish Tim’s latest book, a pair of novellas.

Professor Damien Wilkins, the Director of the IIML, says he is excited about the appointment.

“Tim is an ambitious, adventurous writer with a powerful intellect and a restless imagination. It will be fascinating to see how his forays into essays and other critical thought impact on his fiction.”

During his time as Writer in Residence, Tim will be focusing mainly on a new novel, a piece of speculative fiction using time-travel to explore contemporary issues.

Tim says that the money, resources and time to write as part of the residency will be a rare luxury.

“Perhaps more important—and even rarer—is the fact of being plucked for a year from the writer’s usual isolation, and being given colleagues and a place within the intellectual life of the University.”

Tim lives in Wellington with his partner, Ingrid Horrocks, who is also a writer, and their twin daughters.

For more information contact Damien Wilkins on 04-463 6808 or damien.wilkins@vuw.ac.nz