Throughout her glittering career as an operatic and classical soprano on the national and international stage Dame Kiri has been an inspiration to other artists. She is now committed to passing on her knowledge and skills to young singers from Aotearoa.

Darrin Haimona, chair of Te Waka Toi, said “this prestigious award honours the late Māori Queen, Te Arikinui Dame Te Atairangikaahu and it is fitting that the inaugural presentation made tonight by her son Te Arikinui Kingi Tuheitia is to another Māori Dame with exceptional mana”.

“The Te Waka Toi awards provide the perfect opportunity to celebrate the lives and successes of Māori arts practitioners. They also serve as a springboard for emerging artists through scholarships.

“The awards recognise the mana of people who have dedicated their lives to the retention and future development of Māori arts and culture,” Darrin said. 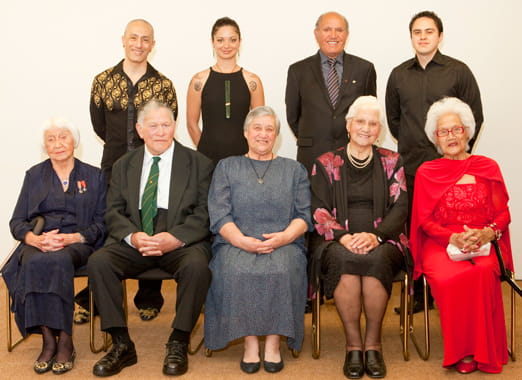 Darrin Haimona went on to praise the recipients. “All are truly amazing individuals who delight and inspire others with their enthusiasm and have collectively made Māori arts stronger and better.”

Accepting her exemplary Te Waka Toi award from England, Dame Kiri movingly said “Both my parents made great sacrifices to enable me to have the life and career I have enjoyed.”

“My mother told me 60 years ago that it was the Māori part of me which would be important. My father Thomas Te Kanawa would have been very proud indeed if he had known about my Te Waka Toi award.”

Developing and supporting young New Zealand singers through the Kiri Te Kanawa Foundation is her main focus these days. She is particularly passionate about mentoring talented young Māori singers and guiding them on to the international stage.

Te Waka Toi honoured five esteemed kaumātua with Ngā Tohu a Tā Kingi Ihaka for their lifetime achievements in strengthening the continuity of Māori culture through their support and practice of ngā toi Māori.

Kihi Ngatai QSM of Tauranga who serves as a member of the Waitangi Tribunal and has a gift for oratory; Tata Maere of Hawke’s Bay, a pillar of her society and a musician and kapa haka performer; Vera Morgan QSM of Wellington, a community icon and kapa haka performer; and husband and wife teachers and Te Reo Māori educational authors Wiremu and Jossie Kaa of East Cape.

Te Onehou Phillis from Eastern Bay of Plenty received Te Tohu Aroha mō Ngoi Kumeroa Pewhairangi: ‘Whakarongo, Titiro, Kōrero’ in recognition of her leadership and outstanding contribution to the promotion of Te Reo Rangatira. Te Onehou is an educator and historian who has published numerous books in Te Reo Māori, including the seminal biography of her father Eruera Mānuera.

Born and bred in the Bay of Plenty, Taiaroa Royal was awarded Te Tohu Toi Kē for making a difference to Māori arts and culture with his illustrious career. Taiaroa is an artistic director and one of New Zealand’s leading modern dancers and choreographers.

Two emerging Māori artists were awarded scholarships to assist with further study. Talented young arts curator and visual artist Reuben Friend from Waikato, who is studying for a Masters Degree in Māori Visual Arts; and gifted Tā moko practitioner Taryn Te Uira Beri from Wellington who is currently studying the artform with her mentor in Tolaga Bay.

Dame Kiri Te Kanawa will perform in Dunedin in October at the Otago Festival of the Arts. This will be her only concert appearance in New Zealand this year.