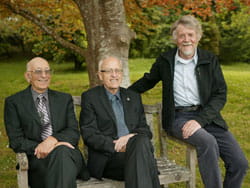 Three of New Zealand‘s most celebrated writers – C K Stead, Brian Turner and Dr Ranginui Walker -were honoured atlast nights2009 Prime Minister’s Awards for Literary Achievement at Premier House in Wellington.
Each writer receives $60,000 in recognition of their significant contribution to New Zealand literature. The awards are administered by Creative New Zealand.
These three writers were recognised in the categories of Poetry [Brian Turner], Fiction [CK Stead] and Non-Fiction [Dr Ranginui Walker].
Prime Minister, John Key said, “It is a pleasure to honour these three great writers. As New Zealanders we should celebrate success more. I am proud to acknowledge the legacy and continued involvement of these well-deserving recipients.”
Creative New Zealand Chair Alastair Carruthers thanked the writers for the outstanding contribution they had all made to New Zealand literature.
“These three writers came of age in times of radical political, artistic and social change and in doing so heralded a new order among New Zealand’s literary community. Their body of works are a lasting legacy, works we read yesterday, today and will continue to read in the future. In influencing the writers of the future we look forward to more from these humble guardians of New Zealand’s literary voice.”

Novelist, literary critic, poet, essayist and emeritus professor of English from the University of Auckland, CK Stead is one of New Zealand’s most honoured and prolific writers who came to prominence in the 1950s as a protégé of Frank Sargeson and Allen Curnow. He went on to gain an international reputation as a critic with The New Poetic: Yeats to Eliot (1964), and his novels have since been translated into 12 different languages.
Poet, essayist, biographer, editor and environmentalist, Brian Turner is one of New Zealands most significant writers on landscape, environmentalism and sport. Turner brings a fresh perspective to nature poetry and is both personal but unsentimental in his approach.
Dr Ranginui Walker is a prominent Māori academic, commentator, writer and administrator. He is the author of the best-selling Ka Whawhai Tonu Matou: Struggle Without End, a history of Māori, as well as a number of other books. He is currently a member of the Waitangi Tribunal.
The Prime Minister’s Awards for Literary Achievement were established in 2003.
Every year, New Zealanders are invited to nominate their choice of an outstanding writer who has made a significant contribution to New Zealand literature in the genres of non-fiction, poetry and fiction. The nominations are assessed by an expert literary panel and recommendations forwarded to the Council of Creative New Zealand for approval.
This year’s selection panel was: Jock Phillips, historian and creator and General Editor of Te Ara, journalist, poet and reviewer Iain Sharp and novelist and short story writer, Catherine Chidgey.
The complete list of recipients to date is: