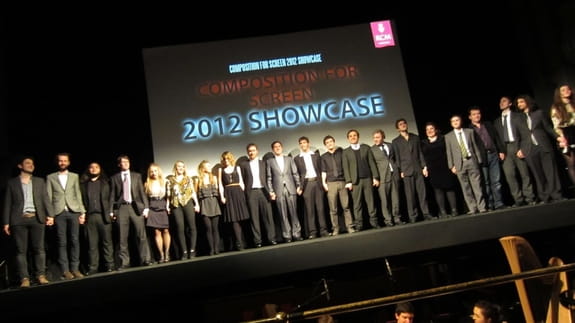 New Zealand composer Ewan Clark (that is him under the 'H' of Showcase in the picture) continues to make his mark while studying at the Royal College of Music with the recent debut screenings of two films he scored - El Tiempo de la Luz and The Outsider.

The 2011 Edwin Carr Scholarship recipient is currently studying towards a post graduate diploma in composition for screen at the college, condensing the two year course into 12 months.

This has capped off an extraordinary first term at the college where Ewan was awarded distinction for his re-scoring of an 11 minute excerpt from the BBC series The Passion as part of an exam.  This involved composing the music, booking the orchestra players, conducting and recording the six minutes of music, mixing the score and submitting it all within a week – no mean feat!

He writes from London, “The standard of teaching here at the Royal College of Music continues to impress, with such a range of film composing expertise on offer from the various tutors.

"Perhaps the most useful aspect of the course has just begun and has surprisingly little to do with music, but everything to do with succeeding in the industry once we graduate. It is Business Studies for Screen Composers. It's a wonderful opportunity to learn how to promote and manage ourselves, budget a score and earn to our potential. Another recent highlight of the course was the opportunity to sit in the booth as the score was recorded for "Wrath of the Titans", a Hollywood blockbuster that is soon to be released. “

A winner of the 1998 New Zealand Young Composers’ Award, Ewan began his compositional study at the University of Otago before moving to Victoria University in 2001 to complete his Bachelor of Music and Graduate Diploma in Arts. As a composer, teacher and conductor he was accepted into the Royal College of Music having been ranked among the top percentile of all applicants at the RCM.

After completing his studies at the RCM, he intends to return to New Zealand to make a valuable musical contribution to NZ film and music.

The Edwin Carr Foundation Scholarship is open to New Zealand composers wanting to further their studies overseas. Up to $25,000 is available from the fund to support one or two composers per year. The Foundation was established in 2004 with interest from the estate of the late Edwin Carr.

Listen to Ewan’s music here www.ewanclark.net, this website promotes his screen music through audio samples and includes testimonials from directors.