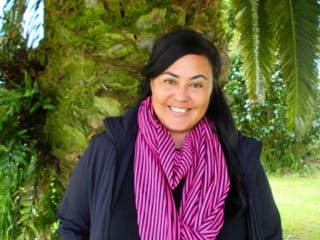 Kelly has been writing comedy sketches for upcoming TV1 show ‘Happy Hour’. She also a short-film script under her belt - ‘Te Pūtōrino’. She was inspired to take her writing to the next step when she worked as a production assistant on 2014 feature film ‘The Pā Boys’ (written and directed by Himiona Grace) – ‘watching it come alive from script to screen.’

Kelly is currently focussing on on a children’s drama series and plans to use her time on Kāpiti Island to work on her feature film script. The film is based on her own whānau. ‘My kuia was a tohunga matakite who lived on Motiti Island. My koroua were members of B Company Māori Battalion.’

The film isn’t anti-Christian, she says, but it tells a story of the impacts of colonisation and Christianity on Māori spiritual beliefs and values.

‘When Europeans first came to Aotearoa, Māori had no written language, they were deemed illiterate. But they could read. They read the stars, they read the flight paths of birds, they read the moon, the tides, the dew on the leaves,’ says Kelly. She says she will also compose traditional waiata for the film during her time on Kāpiti Island.

Kelly is the sixth Kāpiti writer in residence and will head to the island in September to begin her two-month stay.

The Tau mai e Kāpiti Māori Writers' Residency is funded by Te Waka Toi / Creative New Zealand and hosted by the Kaitiaki o Kāpiti Trust. The residency aims to help emerging writers take their writing dreams and goals to the next level.

“This is the only residency in the country created and run by Māori for Māori writers,” says the Trust’s Residency Manager Minnie Clark. “We expect as with the previous five residents Kelly will enjoy being immersed in the natural environment and powerful stories of the island.”

Previous Kāpiti writer in residence, Maraea Rakuraku, says she will ‘always be grateful for the time I spent on Kāpiti. It was highly productive in terms of me shaping, drafting, thinking and writing work.’