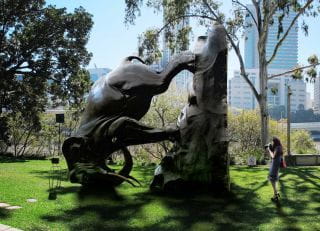 The Premier of Queensland’s Sculpture Commission marks the fifth anniversary of the opening of the Gallery of Modern Art in December 2011 and 20 years of the Asia Pacific Triennial of Contemporary Art in 2012.

On 23 November, the Premier of Queensland’s Sculpture Commission selection committee met to review the submissions by the three shortlisted artists. At this meeting the committee, made up of representatives from the Queensland Art Gallery, Arts Queensland, the arts community, the Indigenous community, Events Queensland and Tourism Queensland, voted unanimously in favour of New Zealand artist Michael Parekowhai’s proposed sculpture The World Turns.

The artist’s proposal comprises three separate but interrelated life—sized sculptural elements cast in bronze: a massive bookend in the form of an elephant tipped on its head; a chair; and a kuril (the local native water rat, which gives Kurilpa Point its name), which looks the elephant directly in the eye.

The World Turns acknowledges the kuril as the caretaker of the site, who upends the elephant with all its cultural and intellectual weight. Visitors may sit on the chair and contemplate the work, with their gaze directed at the kuril.

The selection committee, Chaired by Tony Ellwood, Director, Queensland Art Gallery, praised the work for its responsiveness to the site of Kurilpa Point and its cultural significance.

“The World Turns successfully draws connections between the river, GoMA and the adjacent State Library of Queensland; and is simultaneously contemplative and humorous. The artist’s representation of cultures coming together is at the core of what art galleries aim to do. The committee looks forward to seeing this major public sculpture realised and feels sure that it will become an enormously popular emblem for GOMA and a destination art work for Queensland”.
This project has received financial assistance from the Queensland Government through art+place Queensland Public Art Fund and the Queensland Art Gallery Foundation.