Sauniga (which means preparing for, or a gathering of sorts) features works by Andrew Matautia, Pati Solomona Tyrell and Uelese Vavae – and is curated by Jodi Meadows. Each artist uses portraiture to gather together, define, and connect with Samoan knowledge systems, as well as to reflect on their own identity and that of their community.

Sauniga brings together three recent graduates, Andrew Matautia, Pati Solomona Tyrell and Uelese Vavae. The three each centre their practice in portraiture and use this method to explore and express themselves and their community.

“There is an inherent tension within the exhibition, created by the artists who use Samoan mythology, language and visual culture as a tool to develop contemporary imagery,” says curator Jodi Meadows.

“Portraiture is used as a process to explore their individual cultural identity but also as mechanism to subvert and challenge the ways that we see culture in an everyday context, encompassing both island and urban experience.” 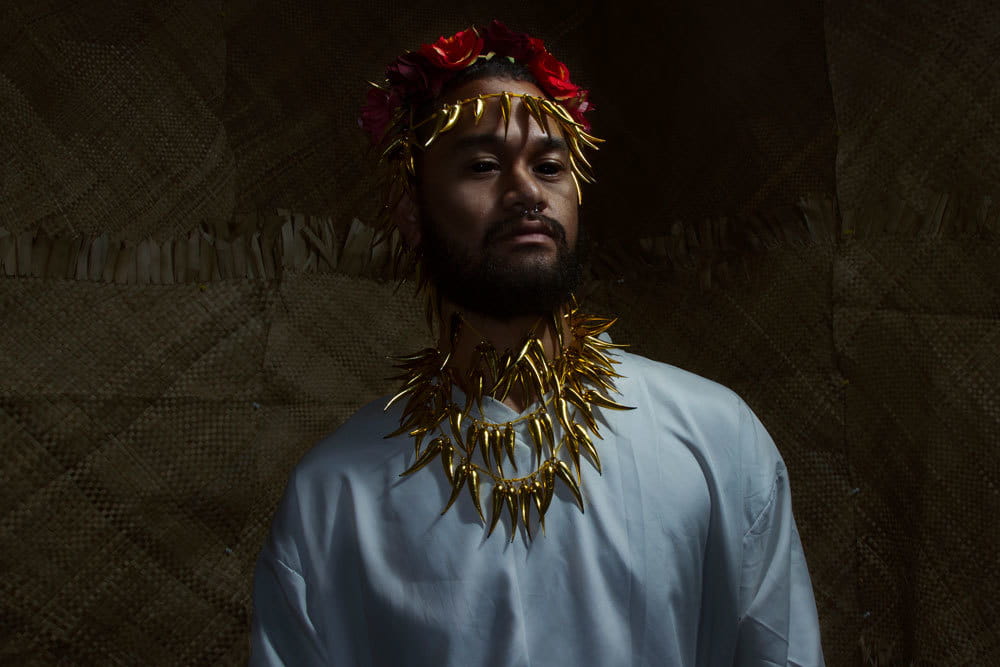 Pati Solomona Tyrell is an interdisciplinary visual artist with a strong focus on performance. Utilizing lens-based media he creates visual outcomes that are centred around ideas of urban Pacific queer identity.

“The work I intend on showing in Sauniga is Aitu FAFSWAG. This photo series is an activation of our spirits and a manifestation of our individual personalities; adopting the narrative that Pacific queer people, Fa’afafine, Fakaleiti, Akavaine were once revered culturally as oracles and persons of status. The series is about reclaiming that mana in a modern context through a visual language that derives from my own practice and world view.”

Tyrell is a co-founder of the arts collective FAFSWAG and a recent graduate of the Bachelor of Creative Arts at Manukau Institute of Technology, Otara. Pati is originally from Kirikiriroa, Waikato but is now based in Maungarei, Tāmaki Makaurau. 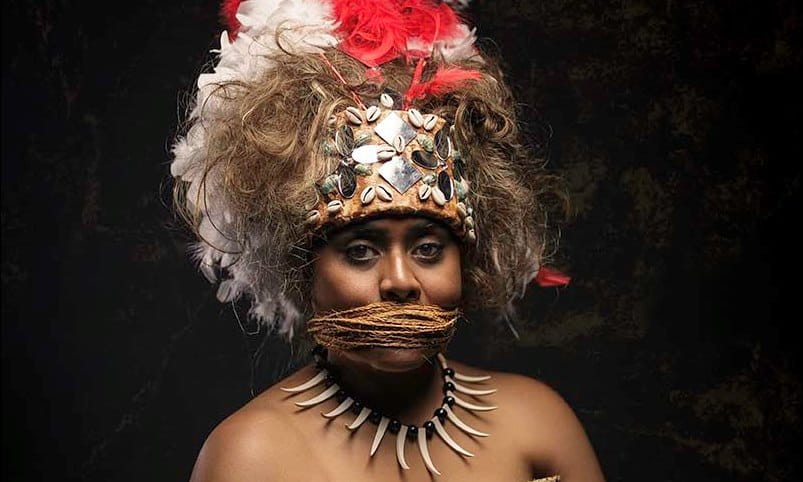 Saint Andrew Matautia’s photography practice was initially a business endeavour. But after using it as a research tool in his Masters studies in the past two years, it has become a medium of self-expression.

“The series of work featured in Saungia is in response to my personal experience through aesthetic education that is very Eurocentric in nature and does not currently cater to the demographic unless the individual is that way inclined to include their culture within their own work which I did. The experiences depicted are also influenced by tā-vā [time and space*] - and consider retrospective, current and future timeframes.”

“The images reflect what I have learnt through my Masters research into aesthetic education through a Pacific lens. I looked at the transfer of indigenous knowledge through ceremonial practice and how that space of learning could somehow be incorporated into design education. I am interested in how by connecting these moments in time I can contribute towards positive change for Moana students in the common space we share within aesthetic education. The images I have created represent pivotal moments in my journey that were also experienced to some degree or other by my contemporaries. The works take in to account the discussions of those who have also contributed to the general discourse, and highlight some of the criticisms of the current experiences. The intent of my work is not to negate or undermine the efforts by many to address and amend the scenario, but to confirm the need for a shift in the paradigm. My focus throughout has been aesthetic education, particularly design education.” 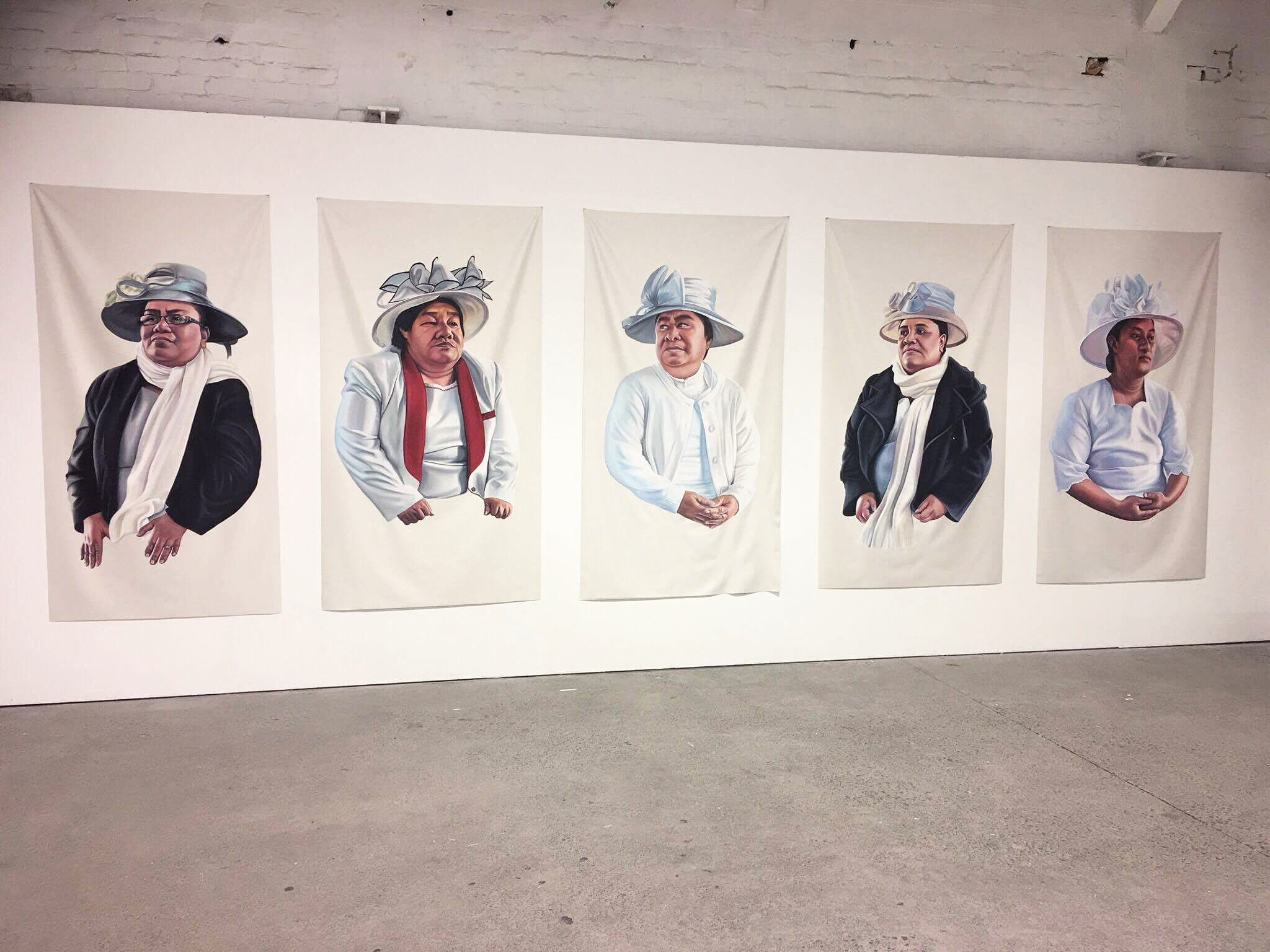 Uelese Vavae says his motivations are formed from a curiosity about his own surroundings, upbringing and identity.

“I am the youngest of five and the only boy in my family. My father is a Reverend of a Samoan Christian Church in Papatoetoe, in which I was raised since shortly after birth. My practice is heavily influenced by the church and its place within Samoan (Pacific) culture, but it is in the rituals and traditions exclusive to my own view, that I am most interested in documenting and representing. Sauniga, to prepare, as a Samoan word is often used in the church to introduce a certain event, such as Sauniga Lotu (church service).”

“The preparation and the progress is what I look for in unique traditions, to reintroduce into the contemporary art world. My intention in my practice is to play the part of the inside man, to openly question the never-ending chain of western effect on contemporary Samoan (Pacific) socio-culture and adopted religion through the celebration and emphasis of uncanny western influenced traditions, while also borrowing classical European conventions of representation in a contemporary form.”