“A beautifully curated programme of performing and visual art works”

The Performance Arcade Festival returns to Wellington Waterfront from 26 February until March 3, after receiving its first major Arts Grant from Creative New Zealand. The annual free event on Wellington’s Waterfront will present in its fourth-year with a lineup of exciting new performance installations, live music, sonic art, digital media, performance art and theatre. This triple award-winning festival blurs the lines between static art, performance, the artist, and the viewer.

The annual event attracts 6000 visitors over four-days and is expected to double its attraction in 2014. Originally presenting as part the New Zealand FRINGE Festival for three-years and in 2013 becoming a ‘special event’ of the FRINGE -The Performance Arcade has now been programmed in the Visual Arts programme of the 2014 New Zealand Festival.

Both the Artist Director Sam Trubridge and Creative Producer Josephine O’Sullivan, who have volunteered on the event for four-years, are pleased to have the opportunity to see out the full vision. The changes the funding will enable include - a larger artistic programme, seed funding for artists, an extension from four to six days, a larger free music programme, a pop-up bar and cafe and the development of the shipping container architecture into a two-story structure with more social spaces for the public.

Creative Producer Josephine O’Sullivan says “I am pleased with the break-through to get seed funding for artists. It has taken many applications and many conversations to receive support for the artists themselves – I hope this fund continues to grow.”

Artistic Director Sam Trubridge says “It is a great chance to showcase many local artists as well as develop relationships with international artists. The Performance Arcade is a new model for audiences and artists to interact in a public space.” 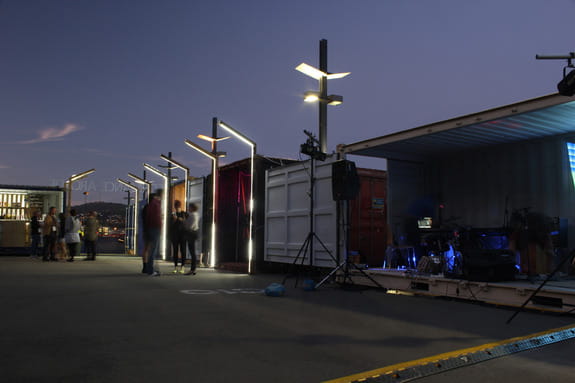 The Performance Arcade includes: The Containers Series, The Waterfront Series and The Live Music Series with over 100 artists participating from New Zealand and abroad.

Highlights to the programme include: Conference of the Birds, by Auckland artist Delicia Sampero, who will install 24 giant metallic birds on top of Wellington buildings as part of The Waterfront Series.

Returning to the Arcade, ambitious Wellington-based designer Kasia Pol, who in 2012 floated a container out at sea, will present an eight-container sound installation with artist Russell Scoones in The Freight.

The Performance Arcade is the supported by Creative New Zealand, Wellington City Council, Te Papa Tongarewa, The Bolton Hotel and Chapman Tripp. It is part of the 2014 New Zealand Festival and is presented by The Playground NZ Ltd.