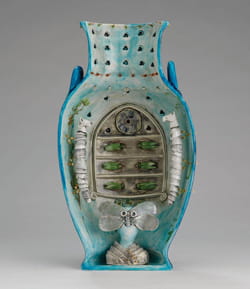 Masterton ceramicist, Kirsty Gardiner rarely wears the flamboyant jewellery left to her by her mother, but its use in her work, Secrets Ajar has just earned her New Zealand’s top ceramic art prize; the 2010 Premier Portage Award.

Mrs Gardiner was honoured with the $15,000 prize at the Awards’ ten year anniversary ceremony held in Auckland tonight.

The South African born artist, who has been making clay works for 25 years, has never won anything in her life before.
‘I’ve been entering the Portage Ceramic Awards for the last eight years, and have never been placed.
‘I’ve always viewed winning ‘the Portage’ like having a good figure; something you aspire to but never seem to get...I just never thought I was in that league.
‘My work is highly personal, so when my mother died suddenly two years ago, I knew her decorative jewellery would find its way into my work; I’m glad it did!’

‘It takes a classic vase-shaped urn and then, literally, opens it up, to reveal a strange and delicate inner world. It shows the narrative, illustrative side of clay. It is like a 3D illustration, a miniature model of a scene from surreal, perhaps slightly gothic and unsettling fantasy story. It references dreams, science, museums, laboratories, mummy jars, collections, nature and metamorphosis (amongst other things). It is quite an intriguing piece, like something straight out of an adult fairy tale.’

Six Merit Awards were presented to ceramic artists from all over the country at tonight’s ceremony.

Each merit award winner was presented with a $1,000 prize.

There were more than 180 entries in this year’s Awards.
Mr Bowers, a multi-award winning ceramicist, teacher, writer, reviewer, arts manager and craft enthusiast, commented that this year’s exhibition works are clever, confident and filled with ideas.

‘This years Portage Ceramic Awards winner’s and finalist’s works would hold a place anywhere in the world. New Zealand ceramic practice, as demonstrated by these works’, shares similar ideas and dialogues with those being explored globally.

‘Artists in New Zealand are working with traditional techniques and materials in contemporary ways to produce diverse and thoughtfully personal works.’

The winners, together with the selected finalist’s works will be on exhibition at Lopdell House Gallery, Titirangi, Auckland from 8 October until 5 December.

To celebrate the Portage Ceramic Awards decade milestone, a People’s Choice Award has been introduced. Voting forms for this Award are available at the exhibition.

The Portage Licensing Trust established the Portage Ceramic Awards in 2000 as a showcase for excellence in New Zealand ceramics. It is due to the generosity of the Trust’s Charitable Foundation that the awards are the country’s best known barometer identifying our finest ceramic artists.

To register your interest in reporting, filming or photography at the awards or for further information, please contact:

Kirsty Gardiner – artists’ statement
I have been potting for 25 years and make whimsical vessels – that are cut in half – to reveal their inner secrets. I make purely for myself, and am lucky when people want to buy my treasures. My inspiration comes from my cats, my childhood, my home and my fascination with insects.
I have always been interested in the history of clay, and love finding objects from the past. This work is inspired by two vases that were given to me by an elderly gentleman. They have a rich dark blue background and lots of gold insects all over them.

The vessel was originally wheel thrown and a mold made from the prototype. Earthenware clay is pressed into the half mould to create the form. The work is multi- fired. I have a vintage collection of ceramic transfers and fire many different bits from my collection onto the glazed work, also using gold lustres. Copper wire and beads and bits of jewellery left to me by my mother also gets included where necessary.
Kirsty works part time as gallery technician at Aratoi Art and History Museum in Masterton.

Originally from Clarence, South Africa, Kirsty has lived in New Zealand for the last 15 years with her husband and three adult children.
She lives in an 1892 converted ‘mausoleum’ in the Wairarapa countryside which she bought for the princely sum of $10,000 eight years ago. She says it is a ‘work in progress.’

Stephen Bowers’ biographical profile:
After several years as Managing Director of Adelaide’s JamFactory Contemporary Craft and Design centre, Stephen Bowers has recently resigned to devote more time to his creative practice. His works are held in collections throughout Australia and the world including Taiwan’s National Museum of History and the Museum of International Ceramic Art in Denmark. He has exhibited in more than 60 group, touring and national survey exhibitions throughout Australia and internationally in Britain, Japan, Thailand, Scotland, Denmark, Hong Kong, Indonesia, Germany, China, United States of America, Italy and Singapore.

Stephen Bowers’ reviews have appeared in a number of publications including The Sydney Morning Herald and The Australian Weekend Magazine. He has published more than two dozen articles in a variety of academic, art and consumer magazines and won more than a dozen awards for his work.

He has been a judge several times before including The South Australian Ceramic Award, Studio Potter’s Club Award and the Walker Ceramics National Student Graduate award.

He is currently preparing for a collaborative exhibition with Paul Scott from the UK and Kurt Weiser from the USA at Ann Linnemann Gallery in Copenhagen in October and a large solo show at Lauraine Diggins Gallery, Melbourne in November.