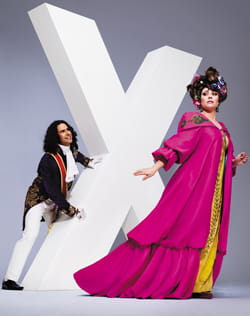 The NBR New Zealand Opera has launched its 2011 Season, revealing a programme of richly contrasting operas:

“Xerxes is laugh-out-loud comedy combined with deliciously beautiful music performed in the most sumptuous costumes. This production is one of the best ads for opera that I know.” Tobias Cole, who sings the role of Xerxes.

A co-production between The NBR New Zealand Opera and Victorian Opera in Melbourne, in association with Auckland Arts Festival, this production of Handel’s Xerxes is the first professional, fully staged Handel opera that has ever been presented to New Zealand audiences.

General Director of The NBR New Zealand Opera, Aidan Lang, says Handel was one of the truly great opera composers of all time. “In Xerxes,” he says, “Handel has created a stream of unendingly beautiful melodies, one hit after another, including one of opera’s most beautiful and recognisable arias, the famous Largo. This is gorgeous music, with an exciting, clean, early music sound, and it’s authentically brought to life by Germany’s Wolfgang Katschner and his top-notch period music ensemble, the Lautten Compagney, who are coming to New Zealand from Berlin especially to accompany this production.”

Glamour and opulence are also prerequisites to capturing the true essence of a Handel opera, so the cast will be stepping out in fabulous costumes designed by the darling of New Zealand fashion, Trelise Cooper. Lang says, “With Trelise’s costumes, you are seeing a modern take on what would have been presented in Handel’s day. It’s a sumptuous visual feast.”

Xerxes is funny, poignant and fast moving, and with the timeless themes of love, rivalry and vices being overcome by courage and loyalty, has plenty to identify with in life today.

Xerxes Director Roger Hodgman sums up: “Handel’s sublime music, one of the world’s finest early music orchestras, great singers, a beautiful set by John Verryt and remarkable costumes by Trelise Cooper. What more could a director ask for?”

Accompanied by the Lautten Compagney
With the Chapman Tripp Opera Chorus

* Friends of the Opera and Opera Exposed events take place before, during and after these performances

The music is passionate and thrilling, and includes some of opera’s great highlights: the rousing Easter Hymn and the famous Intermezzo in Cavalleria Rusticana, and one the greatest of all tenor arias, Pagliacci’s heart-rending “Vesti la giubba”. “Even if you’ve never seen these operas before,” Aidan Lang says, “the chances are very high that you’ll recognise much of the music, particularly the music of Cavalleria Rusticana, which has been used in everything from commercials to The Godfather III movie.”

“This is unashamedly big opera,” Lang says. “It’s opera at its most vibrant and exciting. And when done properly and interestingly, Cav &amp; Pag are brilliant pieces in the theatre. You won’t see anything old fashioned in these productions. We’re creating them in a fresh, intelligent, thrilling manner.”

And as Director Mike Ashman says: “The obsessive nature of Cav &amp; Pag and their impossible love affairs make them the first operas which are modern enough to us to be like movies.”

*Friends of the Opera and Opera Exposed events take place before, during and after these performances.