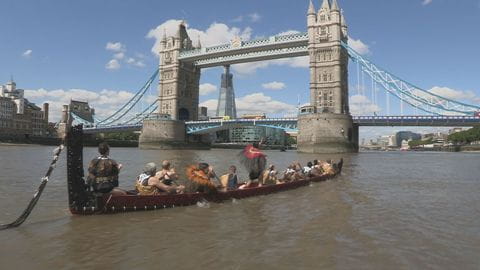 The New Zealand Waka preparations, coordinated by Toi Maori, are well under way for the Queens Diamond Jubilee River Pageant in London on 3 June (UK time).

A crew of 14 has been selected and commences training at the end of March.. Most ofthe crew have previous experience in international promotions of New Zealand through the waka having crewed in Netherlands in 2010 and London in 2011.

Earlier waka projects for coordinators Toi Maori were to San Francisco in 2005 and Valencia in 2007. General Manager Toi Maori Garry Nicholas commented, “The waka taua is a symbol of Pacific and particularly Maori design innovation and adaptation brought about by the availability of large trees in this country.

The artistry of the carved features on the waka taua celebrates the use of resources this country provided early Maori settlers in greenstone tools. It also symbolises a vessel under good leadership well trained crew and with clear objectives can achieve goals.” Perhaps with those ideals its not surprising New Zealand is increasingly embracing Maori imagery and symbolism in its international profile. What was once the preserve of arts and cultural festivals may also see resonance in New Zealand business promotions.

Meanwhile in London the immense logistical planning is well in hand. The British are renowned for their organisation of pageantry and this year’s event will bring out the best in British planning.

The Thames is a difficult stretch of water for people powered craft. London based organisation ‘Thames Alive’ is working with the Pageant Foundation to coordinate the flotilla for people powered craft that will lead the pageant. Director, ‘Thames Alive’ Malcolm Knight advised in his recent newsletter to participants, “Our flotilla is a very small part of a very big picture and we all have to fit together to achieve the goal of 1,000 plus boats saluting HM Queen Elizabeth.”

Toi Maori’s ceremonial waka taua Te Hono ki Aotearoa (The Link to New Zealand) will once again feature on the Thames River as it did last year during the City of London Festival in July 2011.