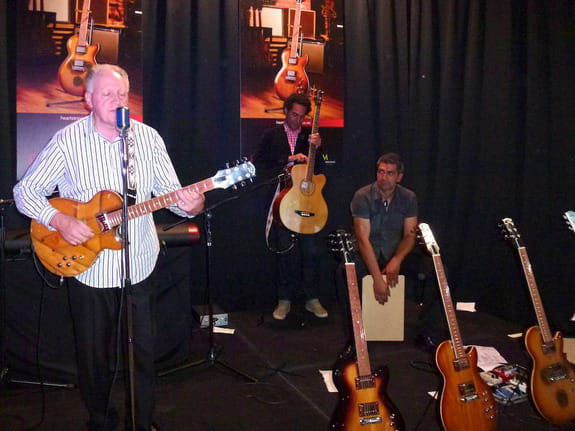 An incredible $111,000 was raised from the auction of the seven Heart Strings guitars in Christchurch last Friday night.  All profits will go to the Christchurch arts community via Creative New Zealand’s Earthquake Emergency Assistance Grants.

“This is the first time in New Zealand that an online auction and live auction have been run simultaneously and it was a huge success,” said event organiser, Sheena Hemens of Go To Events.

Caption: winner of the Homebush Guitar, Terry Kearns, performed Dave Dobbyn’s “Loyal” on the guitar at the auction to rapturous applause and calls for encores.

Creative New Zealand Chief Executive, Stephen Wainwright thanked the Heart Strings creators, Bruce and Jason Pickering.  “Their idea to create and auction the guitars was an innovative response to the earthquake by these Cantabrian artists.  The money raised is a great contribution to our support of the arts community in Christchurch,” he said.

Throughout the evening the seven guitars were individually auctioned on Trade Me with live bids also taken from the floor in real time. Live bidders competed with Trade Me bidders and the result was highly addictive, watched with anticipation by the event audience as well as the many Trade Me viewers from around the world.

“Many of the owners of the destroyed buildings were present and this added to the emotion and significance of the event” said Sheena.

Five of the seven guitars were sold to people who attended the auction. Among the successful bidders were the owners of Christchurch’s Southern Blues Bar, Nigel Church and Leanna Christie whose iconic business was destroyed by the earthquakes. The very emotional couple successfully bid on the ‘Southern Blues’ guitar and plan to feature it in their new bar once it is rebuilt. Another couple, who wish to remain anonymous, bid successfully on two of the guitars; Ohinetahi, was sold for an amazing $21,000 and Gunyah for $19,000.

The final two guitars were won on Trade Me by a supporter of the Christchurch arts community from Queenstown.  Their goal  was to buy the Graduate guitar but they happily won the Chester as well.

All the new owners have agreed to allow their guitars to appear with their creators, Bruce and Jason Pickering, at a concert in Auckland at The Wharf on March 11th. Mandy Pickering will be singing songs inspired by the Christchurch earthquake and these special guitars will be played in public for the last time.

About Heart Strings
The earthquake marked the end for many historic buildings in the Garden City and for Jason Pickering, a Christchurch musician and his father Bruce, it was the catalyst for an idea that was to become Heart Strings.

Music and The Arts have always formed part of the heart and soul of Christchurch, so Jason and Bruce thought it seemed fitting that a small piece of history that was "lost" be given life as a viable and beautiful musical instrument.

The wood was donated by the owners of many historic and iconic Christchurch buildings that fell in the earthquake. The seven guitars are each named after the building from where the wood came from and each guitar in the series tells its own story. "In many cases the timber itself dictated the story and each piece could be given a new life and an entirely new purpose" - Says Jason Pickering who was tasked with collecting the timber along with Linda Giles, a local identity.