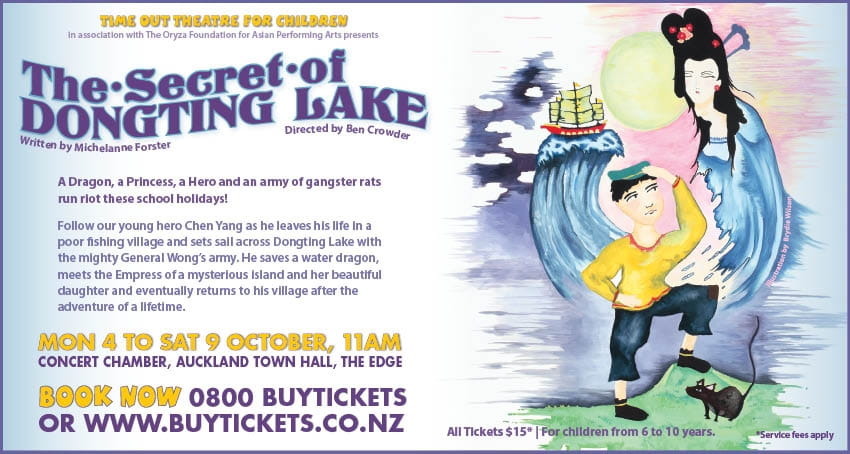 A Dragon, a Princess, a Hero and an Army of Rats run riot these school holidays when The Secret of Dongting Lake opens at the Auckland Town Hall on October 4.

Based on a Chinese folk story, The Secret of Dongting Lake follows our young hero Chen Yang as he leaves his life in a poor fishing village and sets sail across Dongting Lake in the mighty General Wong’s army. Disobeying orders after saving a water dragon, Chen Yang is washed ashore after a fierce storm destroys the ship. Here he meets the Empress of the mysterious island and her beautiful daughter. All isn't a fairytale for Chen Yang though, as he discovers on the eventual return to his village.

This premiere production has attracted a top team of Auckland’s finest creators, producers and designers for what is set to be a visually arresting and magical piece of children’s theatre. Acclaimed writer Michelanne Forster first developed this as a script idea for the Calico’s Children’s Theatre. Her original script, designed to be performed by young school students has been re-imagined by Forster for this new adaptation which boasts a professional cast and caters to an audience of 6 – 10 year olds. Forster is a much loved and revered NZ playwright (The Rosenberg Sisters, Daughters of Heaven) who also brings her experiences with a younger generation of New Zealanders as a children's book author.

With his work hallmarked by innovation, director Ben Crowder's previous work for young audiences has included Silo Theatre's sell-out smash hit Badjelly The Witch and the large scale touring production of Buzzy Bee's Big Day Out. Not resigned to simply catering for younger audiences, Crowder's innovation has led to his most recent work, 360 (debuting as part of the International Festival of the Arts in Wellington) and the 2006 Chapman Tripp award winning Head – which pushed contemporary technologies with the theater form.

Dongting Lake is a real lake in North Eastern China. The area is well-known in Chinese history, literature and art. Dragon boat racing is said to have originated here and a dragon-king is said to live at the bottom of the lake. With its rich mythology and ancient traditions it makes a wonderful and highly engaging subject for a theatre production.

With its exciting visuals, madcap action and talented team The Secret of Dongting Lake is set to be an amazing and entertaining school holiday adventure.

The Secret of Dongting Lake has been generously funded by Creative New Zealand and Auckland City.

Preshow Entertainment: Storytellers from Auckland City Libraries will be reading from 10.30am until the show at 11am.

The Secret Of Dongting Lake plays:

Tickets: $15.00 plus booking fees, Bookings through THE EDGE: 0800 BUY TICKETS or www.buytickets.co.nz, Recommended for ages: 6-10 years