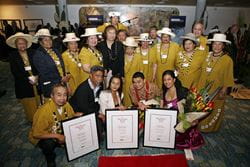 The five awards are an opportunity for Creative New Zealand to encourage and celebrate excellence in Pacific arts in New Zealand.

The recipients include a master craftsman of the traditional art of lalava, a performance artist who will be participating in the 2010 Sydney Festival, a traditional weaving group which was formed to rebuild, restore and reunite Niuean families in New Zealand, a Samoan composer/performer who finds inspiration from old Samoan folk songs, set dances and oratory and an aspiring opera singer who sang for the former US Secretary of State, Condoleezza Rice.

“Every year we are thrilled and delighted with not only the calibre of artists nominated but the range of artistic fields that they work in. The Pacific experience in New Zealand is unique and these awards enable Creative New Zealand to acknowledge and celebrate the contribution these artists make to the flourishing New Zealand arts landscape.”

The awards presented were the Emerging Pacific Artist Award ($3000) to composer Poulima Salima, the Iosefa Enari Award ($3000) to performer Elisha Na’otala Fa’i, the Pacific Heritage Art Award ($5000) to the weaving group Falepipi he Mafola, the Contemporary Pacific Artist’s Award ($5000) to artist Shigeyuki Kihara and the Senior Pacific Artist Award ($10,000) to master craftsmen Sopolemalama Filipe Tohi.
Samoan composer Poulima Salima has been awarded the Emerging Pacific Artist Award in recognition of his diverse range of music composition and performance for stage and screen. He has composed music to accompany theatre, animation, choreographed dance and film. Poulima is inspired by Samoan history, culture and oratory and is determined to implement these expressions through music composition to the world stage.
The Iosefa Enari Award (recognising the pioneering role Isoefa Enari held in Pacific opera) has been awarded to Samoan singer Elisha Na’otala Fa’i. The Palmerston-North born singer has performed in the New Zealand Secondary Schools Choir, the New Zealand Youth Choir, and more recently the Chapman Tripp Chorus as part of the New Zealand Opera’s recent productions La Boheme, Jenufa, Madam Butterfly and Eugene Onegin. Elisha, is always keen to celebrate her Pacific heritage with Samoan song and dance, and has performed at the opening ceremony of the 2007 South Pacific Games in Samoa, in Malaga in Fiji in 2006 and in 2008 for then US Secretary of State, Condoleezza Rice’s visit to New Zealand.

Falepipi he Mafola Group has been awarded the Pacific Heritage Art Award recognising its active community engagement with promotion of Niuean heritage arts. The group was formed 16 years ago to develop, maintain and promote the Niuean handcraft skills in weaving, plaiting, netting, carving and most importantly language.

She will exhibit at the Sydney Festival and Auckland Triennale next year.

Tongan master craftsmen, Sopolemalama Filipe Tohi has received the Senior Pacific Artist Award ($10,000) in acknowledgement of his outstanding contribution to the heritage of the traditional art of lalava and ‘mana’ within the community. His work is based upon the ancient Pacific Island art form used for joining and binding materials together and used on houses, canoes and tools before the introduction of Western materials.

The Arts Pasifika Awards is an initiative of the Pacific Arts Committee offered annually since 1996 and revised in 2002 to include four more awards. The awards’ primary purpose is to acknowledge and recognise the contribution of Pacific artists to New Zealand. The awards support emerging and established artists across all art forms, acknowledge the late Iosefa Enari’s outstanding contribution to the arts and recognise the importance of innovation and excellence in Pacific arts.